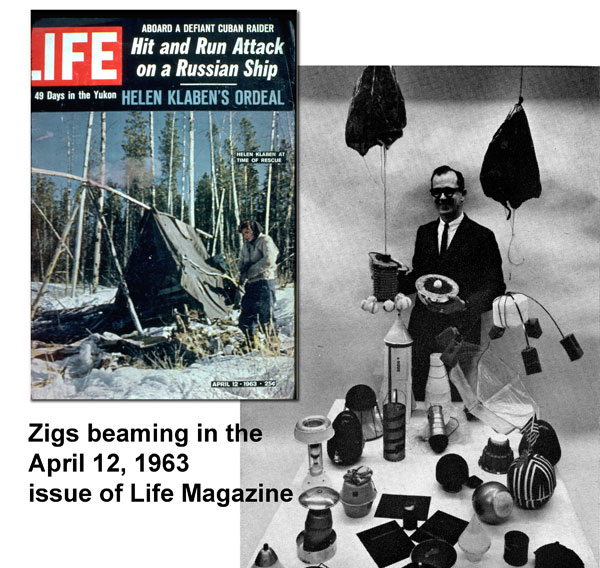 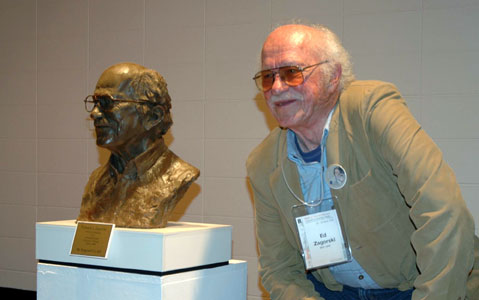 Have you ever wonder where that famous egg drop design project came from?

NASA is headed into space and planning to drop astronauts into the ocean on the return trip. In 1962 an Industrial Design professor at the University of Illinois by the name of Ed Zagorski has an idea to have his students design and build packaging that allows an egg to survive a catapult trip (catapult made from a Pontiac leaf spring built by a young shop tech named Craig Vetter... yes THAT Craig Vetter) into the pool in front of the Industrial Design building.

I just saw that Ed Zagorski passed away recently. I never knew him, but I do remember Craig Vetter speaking about him when Craig visited the University of Illinois when I was a student there. That was a very memorable experience for me and no doubt further influenced me to build a motorcycle for my MFA thesis exhibition.

Anyway, Ed sounds like a fascinating person and an extraordinary teacher. Do yourself a favor and go read about Craig's writing about Ed. This was a really interesting read and it was great to hear about the kind of teacher and influence he was. The world needs more teachers like this. Sounds like the students were special too.

In Spring of 1952, Zagorski introduced his freshmen to designing box kites, which startled the administration, but has since has become a common exercise in basic design education. He was head of the industrial design program at the University of Illinois from 1956-88, and upon retirement became professor emeritus. In 1963, he introduced the legendary "egg drop challenge," which was even featured in LIFE magazine. It's an excerise that is still practiced in schools and colleges.

Zagorski was president of Industrial Designers Education Association (IDEA) in 1963. A year later, Josef Albers recommended him to review a book by Johannes Itten and wrote, "I think you well represent the newer and broader development of 'basic design' in the U.S." In 1965, Zagorski became a Fulbright Scholar and Lecturer for one year in New Zealand, and is an Honorary Member of the Designers Institute of New Zealand (DINZ). In 1979, he was awarded Fellowship in the Industrial Designers Society of America (IDSA).

In 1980, he received an award for Excellence in Undergraduate Teaching from the University of Illinois. He earned a National Endowment for the Arts grant to write a series of articles on basic design, and in 1985, he was featured in an article in Smithsonian magazine on creativity in the classroom. In 1986, the University of Alberta, Canada awarded Zagorski the Distinguished Visiting Professor of the Endowment Fund for the Future, "because of his contribution to the development of industrial design on this continent that has been far and wide since his appointment at the University of Illinois at Champaign." In 1989, he received the Education Award for Excellence in Teaching from IDSA.

He has written many articles for IDSA's INNOVATION magazine and conducted workshops and lectured in New Zealand, Australia, Canada, Mexico, Poland, Russia, Italy and the Netherlands. He authored a book on basic design problems: Get Ten Eagles

sidenote: go read about Craig Vetter's father if you have time. There's some interesting Rantoul, IL and Chanute history there. I worked in Rantoul right after graduating from the U of I.

The character of people that were a part of the WWII generation will never be seen again in this country...period! Their impact on the following generation was also felt, but I think that impact is all but faded away except for those who spent considerable time with people that lived during that time period. This fading away explains the lack of teaching practical skills in the schools. I'm glad Jill and I spent so much time with her English Grandmother and G.I. Grandfather as their stories of life during that time still resonate with me.

Craig Vetter put on a talk at the AMA Vintage Days at Mid-Ohio 14-15? years ago on the topic of high mileage vehicles. My brother and I attended the seminar and I had a chance to talk to Craig after the seminar and told him about the high mileage contest my students were involved in. He sent us some info and I had a chance to pick his brain a little more. Interesting guy for sure.

I had an old toaster tank BMW that had one of his Wndjammer fairings on it when I bought it. One of the first things I did was give it the old heave-ho. He must have made a million of those things as well as a million bucks from the profits but my idea of a fairing was more along the lines of what BMW put on the R90S.

BTW, we used to do an egg drop at the high school in our Intro to Tech class. I had know idea where the idea came from - thanks for info, as always.