The role of automata in technological progress is considerably important. Efforts to imitate life by mechanical means fostered development of mechanical principles, which led to the production of more complex mechanisms. In the same way that Maillardet's Automaton was built and programmed to delight with its poems and pictures, so today we build and program computers to perform even more amazing tasks. In its own time, Maillardet's Automaton was a wonder that helped pave the way for the greater and bigger technological wonders that amaze us today.
During the 18th century, people were in a state of wonder over mechanism. The first complex machines produced by man were called "automata." The greatest and most fascinating mechanisms were those that could do things in imitation of living creatures. This Automaton, known as the "Draughtsman-Writer," is one such machine.
When the repairs were completed and the driving motors were set in motion, the Automaton came to life. It lowered its head, positioned its pen, and began to produce elaborate sketches. Four drawings and three poems later, in the border surrounding the final poem, the Automaton clearly wrote, "Ecrit par L'Automate de Maillardet." This translates to "Written by the Automaton of Maillardet." Amazingly, the first clue of the true history and identity of the machine had come from its own mechanical memory!
Henri Maillardet was indeed a Swiss mechanician of the 18th century who worked in London producing clocks and other mechanisms. He spent a period of time in the shops of Pierre Jaquet-Droz, who was in the business of producing automata that could write and draw. It is believed that Maillardet built this Automaton around 1800. He made only one other Automaton that could write; it wrote in Chinese and was made for the Emperor of China as a gift from King George III of England.
The Franklin Institute's Automaton has the largest "memory" of any such machine ever constructed—four drawings and three poems (two in French and one in English). Maillardet achieved this by placing the driving machinery in a large chest that forms the base of the machine, rather than in the Automaton's body.
The memory is contained in the "cams," or the brass disks seen below (left). As the cams are turned by the clockwork motor, (below right) three steel fingers follow their irregular edges. The fingers translate the movements of the cams into side to side, front and back, and up and down movements of the doll's writing hand through a complex system of levers and rods that produce the markings on paper.
-Franklin Institute 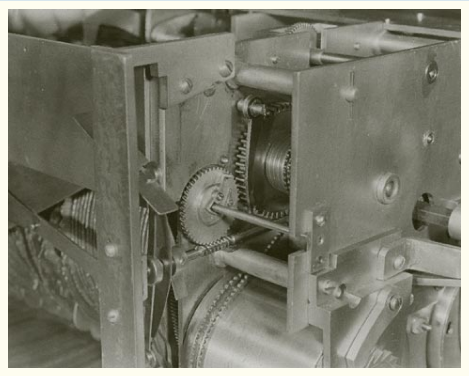 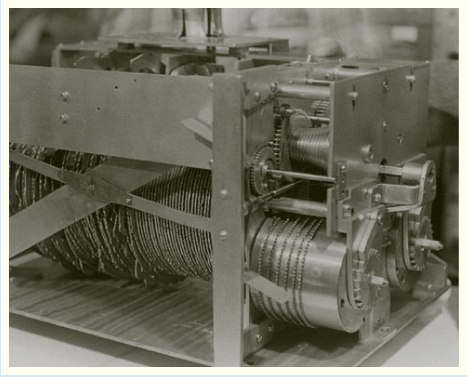 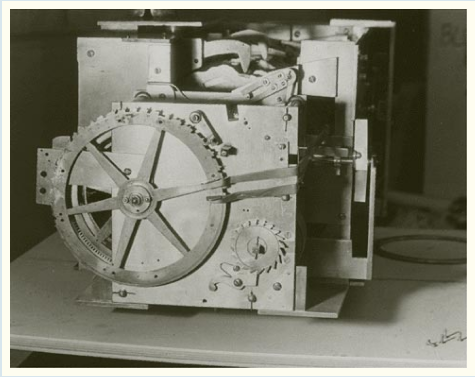 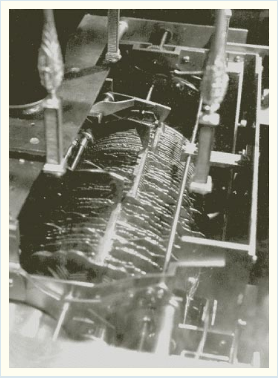 Posted by Frankie Flood at 9:32 PM