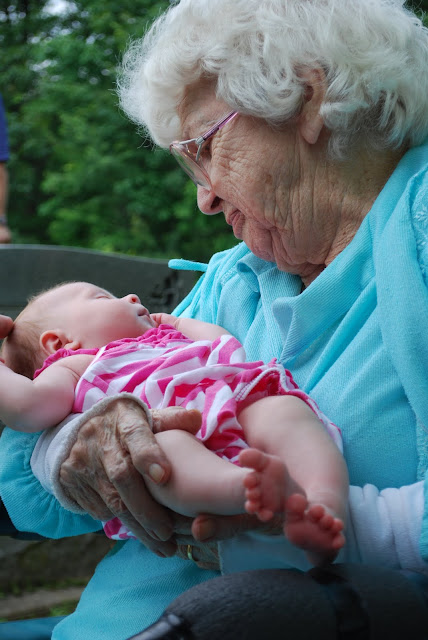 My Grandmother passed away early Sunday morning. Ruby Grace Blair was the kindest and most grateful person that I've ever known. Her ability to find beauty in the smallest of things was unmatched. I have fond memories of sitting in the swing on the porch of her big red house on main street while she worked on snapping green beans or shelling peas (to get ready for canning), and she would be telling us stories about her neighbors when she lived on the farm. Her house was the place to be, to change out of a hot wool band uniform after marching in a parade and it was the place to be if you wanted to be treated like a king. She would always see to your important needs... like a piece of toast (I'm not sure why, but I used to consume mass quantities of toast at her house). It goes to show that something so mundane could always seem so special at her house.

Grandma Blair had the stongest faith of anyone I've ever known and you could always count on seeing her on the far side of our small country church, tapping her hand against her lap as she sang a familiar hymn. She was the wisest person I've ever known, not to mention that she was very well read and always up to the challenge of the daily word scramble. She experienced many things her life and worked hard every step of the way, but always gave God the credit for everything in her life. I'll never met a more positive person than her. She was a strongest woman in my life ad will be missed greatly.

My condolences. It sounds like she was an extraordinary woman. I'm sorry for your loss.

I agree with you. Grandma made me feel like a queen. She had a way of making each of us feel very special. She took me to Bible School when young. Also mom and I went with Grandma and Grandpa to revivals at the Trilla Church. She set the example of what it means to be faithful Christian.

Its sound to me she was very dedicated lady. I have to mention how phenomenal it is to see you carry along such fond memories.

Thank you for showing the same charismatic lifestyle with all of your students & faculty.


p.s. I was fortunate enough to share time with my great-grandmother (tomato canner), she'd always have Andies candies, save rubber bands, and perms on Saturday. She owned a Black Forrest cuckoo clock and corded telephone. She was so patient, she'd stand still at the door waving goodbye until the car leaving was out of sight.

**To the good old fashion Grandmas

Thanks! She lived a good life.

Frank, thanks for sharing your memories of your grandmother. Sounds like ours were from the same mold!