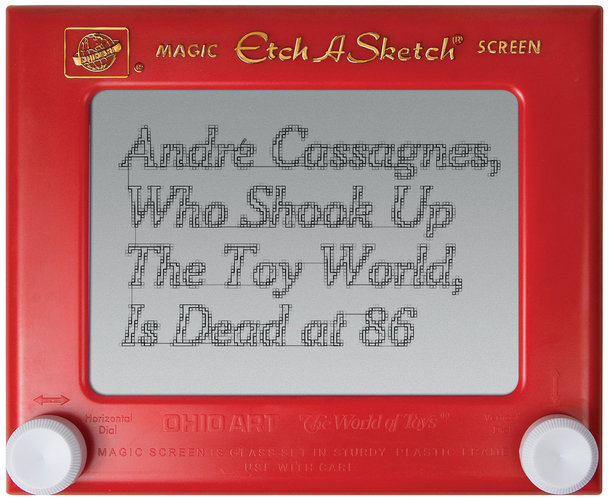 André Cassagnes, a French electrical technician who half a century ago invented Etch A Sketch, the mechanical drawing toy that has lately become an American political simile, died on Jan. 16 near Paris. He was 86.

André Cassagnes was born in 1926 outside Paris and as a boy worked in the bakery his parents owned. As a young man, he took a job as an electrical technician in a factory that made Lincrusta, a deeply embossed covering applied to walls and other surfaces to mimic sculptural bas-relief.

One day in the late ’50s, as was widely reported afterward, Mr. Cassagnes was installing a light-switch plate at the factory. He peeled the translucent protective decal off the new plate, and happened to make some marks on it in pencil. He noticed that the marks became visible on the reverse side of the decal.

In making its faux finishes, the Lincrusta factory also used metallic powders; Mr. Cassagnes’s pencil had raked visible lines through particles of powder, which clung naturally to the decal by means of an electrostatic charge.

Mr. Cassagnes spent the next few years perfecting his invention, which was introduced in 1959 at the Nuremberg Toy Fair. (Because the toy was patented by Arthur Granjean, an accountant working for one of Mr. Cassagnes’s early investors, Mr. Granjean is sometimes erroneously credited as the inventor of Etch A Sketch.)

After Ohio Art acquired the rights to the toy for $25,000, Mr. Cassagnes worked with the company’s chief engineer, Jerry Burger, to refine its design. Where Mr. Cassagnes’s original had been operated with a joystick, the final version mimicked the look of the reigning household god of the day — the television set. It soon became the company’s flagship product. - NY Times

I used to spend hours playing with the Etch A Sketch at my grandmas house when I was young. Funny how working the two dials is so close to using the crossfeed and carriage on a lathe when you are organically turning something. Translation of skill...

So many great memories! The I-pad of our day. How many hours did we spend as children playing with the etch a Sketch. Thanks