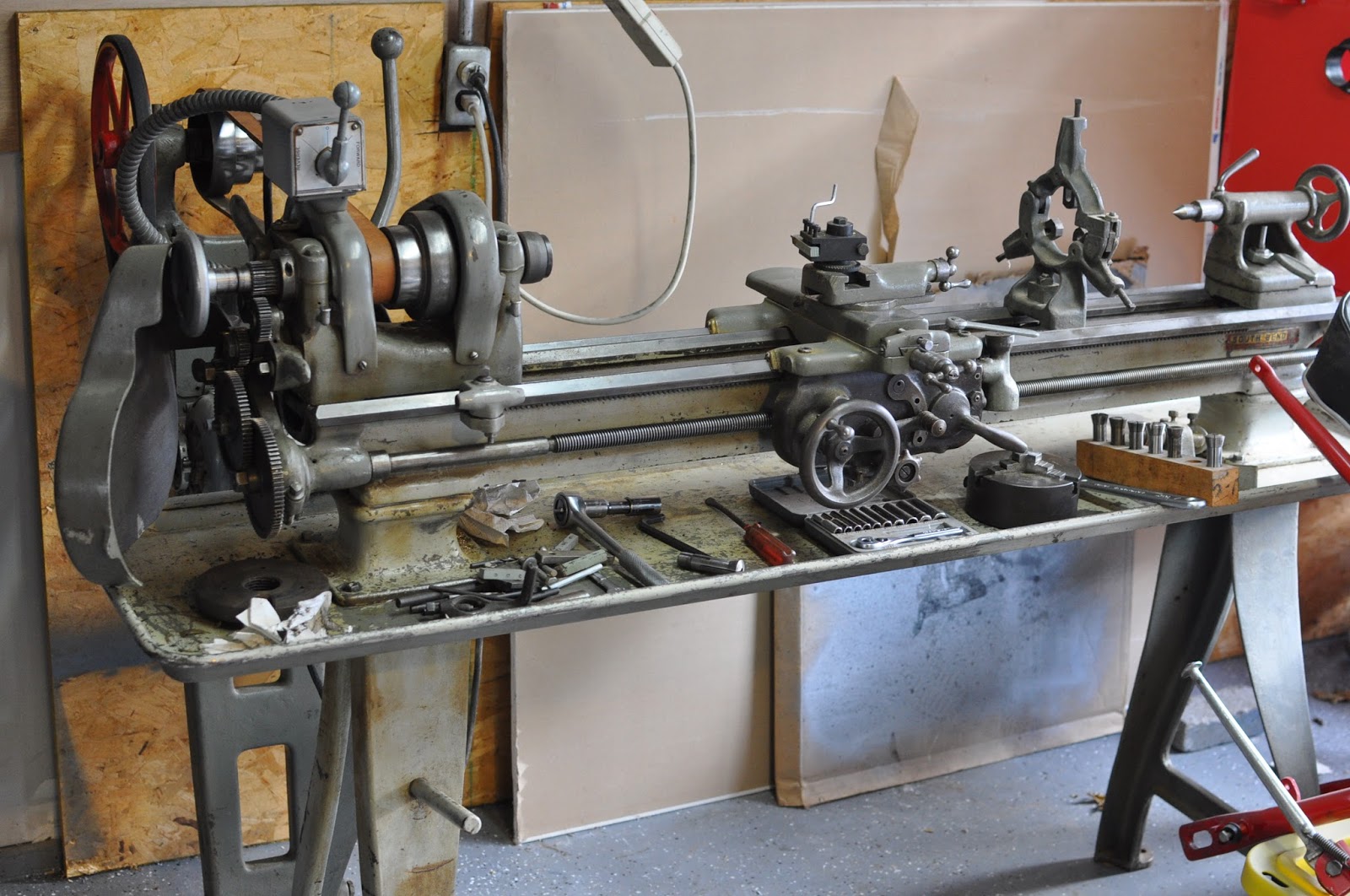 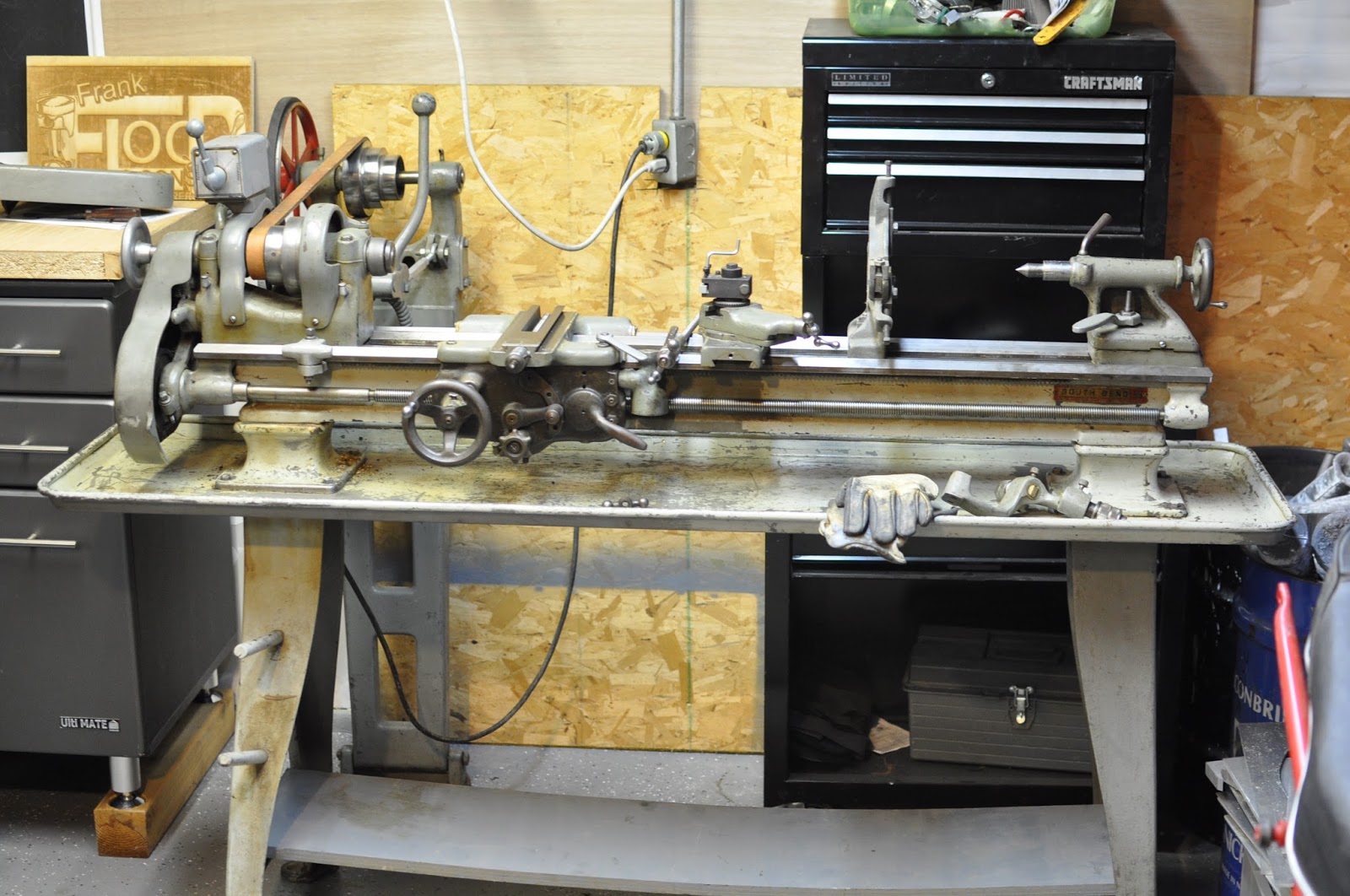 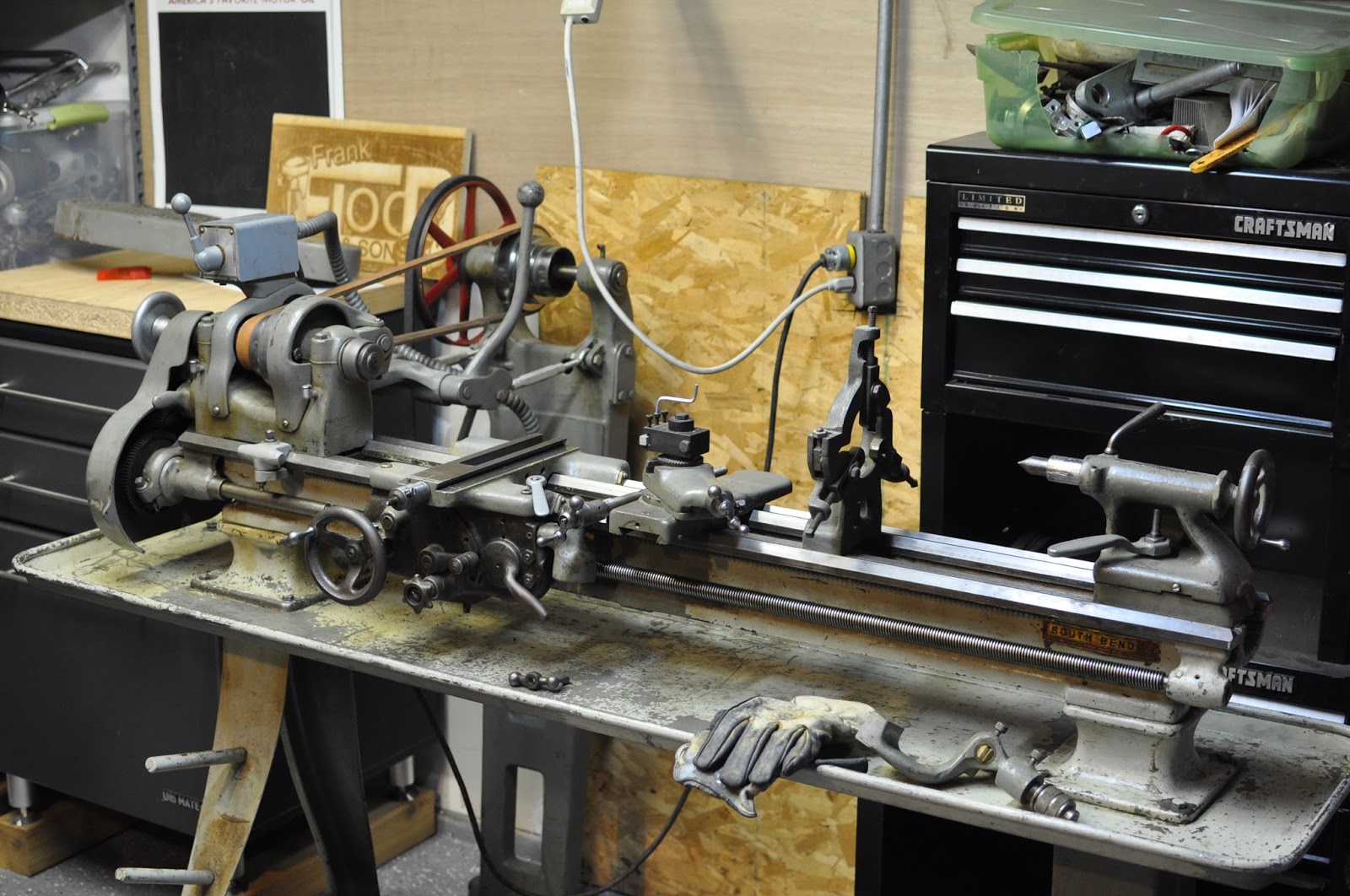 Noah and I went and picked up a South Bend 9" lathe. It has a 4 1/2 foot bed as well as the cast iron legs, chip tray and floor mount countershaft drive. South Bend made a ton of 9" Model A, B, and C lathes, but I have only seen a few that have all of the features that I mentioned above (and mainly in old sales brochures). I already have a floor mount drive like this one, but have never been able to come across the legs, let alone the pan as well as a 4 1/2 foot bed. I have only seen a few of theses floor drives, so I figured I should grab this one to add to my fleet. Chad just asked me the other day about collections and if there was anything I liked to collect. We discussed things from my childhood: like G.I. Joes, Star Wars figures, comic books, and later magazines, but the one thing I arrived upon was my love affair with old lathes. I think maybe it might seem stupid to own three South Bends lathes of the 9" variety, but when I am able to justify it through the slight variations like owning a Model A with quick change gear box for threading or my original Model C that holds particular sentimental value due to it being my first "real" lathe, you start to see why I ended up with the Model C long bed with Model B/A apron (not to mention the legs and floor drive). That said, I also have a 13" South Bend that I just like to stare at in my studio. Location also plays a role in owning so many lathes; It's good to have a lathe or three at the studio, two in the basement, and one in the garage. Did I mention size is also a factor? Thus the reason for the micro lathes at school and in the basement. Sometimes a big lathe is just too BIG. Well regardless, I realize now that my obsession runs deep.

This particular lathe has had an interesting past. It's previous owner used it to repair and tune bassoons. He was getting rid of it as he had recently retired from a University teaching position where he taught how to play the bassoon as well as how to keep them in tip top condition. He is moving to Arizona and didn't want to move the beast. He showed me his instrument shop as well as where he would silver solder components in brass and nickel silver for these old bassoons. Noah got to see some early military bassoons from the 1800's that the man had purchased in Belgium. He even showed me an area of his shop where he would handcraft the unique double reeds for the instruments. The 4 1/2 foot lathe was the perfect length for the occasional long bassoon components that he would turn. He had the lathe in his basement and he told me that he had four or five guys carry it down the steps to it's resting place. I think he was surprised when Noah and I showed up with tools in hand to dismantle the lathe and carry it up in pieces. I had it torn down into manageable pieces in less than 15 minutes (he seemed surprised by that as well). Noah and I took the majority of the tooling and pieces up the steps and out to the car while we waited for John to arrive to help with the lifting of the lathe bed. John arrived and in less than 45 minutes total we had the entire lathe in the back of the car. I unloaded it by myself and reassembled and now have it up and running in my garage.

I was fortunate to get a steady rest, follower rest, and 3C collets and collet closer as well as a lot of miscellaneous tooling. The long bed will make a great addition to the collection and I look forward to using it this summer.

I just recently bought a lathe like yours was wondering if you had the dimensions of how far back you mounted the counter shaft from the lathe? thanks for any help

The front edge of the coutershaft base is 7" from the back edge of the lathe leg. I think your belt length will determine the spacing though.

Thanks for the help not a lot of info on this model of lathe on the web.

No problem. Yes, there is not a lot of info about this one. I have another one of the floor mount drives besides the one I have attached to this one. I have only come across a couple others in pictures online. I wish I could find some legs and I'd be able to put together another floor style SB 9". I'd love to see some pics of yours sometime. You could send them to my email at frankieflood"at"gmail.com.