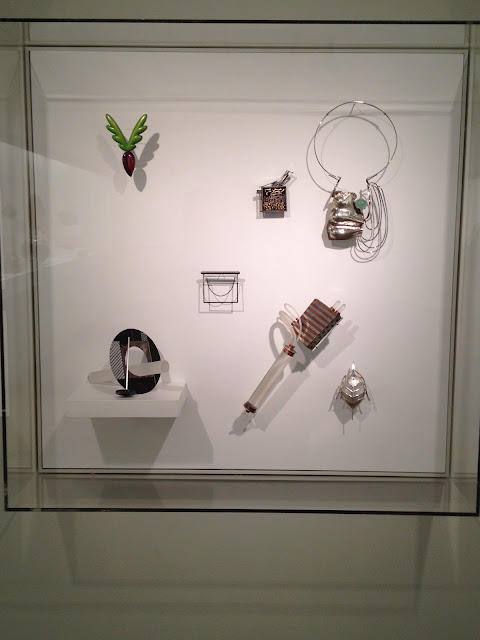 The Contemporary Craft gallery documents the innovative work in craft media that began in America in the mid-1950's and continues today. Previously handcrafted objects used traditional forms to express function. During and immediately after World War II, however thanks to the Serviceman's Readjustment Act of 1944 (the "GI Bill"), a new bread of artists-known as Studio craftsmen-attended art schools and universities where they were exposed to fine arts. They began using clay, fiber, glass, metal, and wood to make unique or limited-edition works that emphasize content over function and technique. Ignoring their decorative art heritage, these innovators fashioned works that echo the period's formal concerns with color, imagery, and minimalism.

Initially, Studio craftsmen saw themselves as solitary artists working within the confines of their own studios. However, by the 1980's, participation in exhibitions to meet tenure requirements combined with a marketplace that had evolved from craft fairs into a network of galleries and art fairs. This led to a greater emphasis on production; and thus the establishment of large studios with numerous assistants resulted. At the same time contemporary painters, sculptors, and architects became increasingly intrigued with craft media, often augmenting their regular production with experimental works in craft media fabricated by independent workshops or technically proficient "hired guns." Although the Studio movement declined in the 1990s, today artists of diverse backgrounds use craft media to a greater extent than ever before as vehicles of contemporary expression. 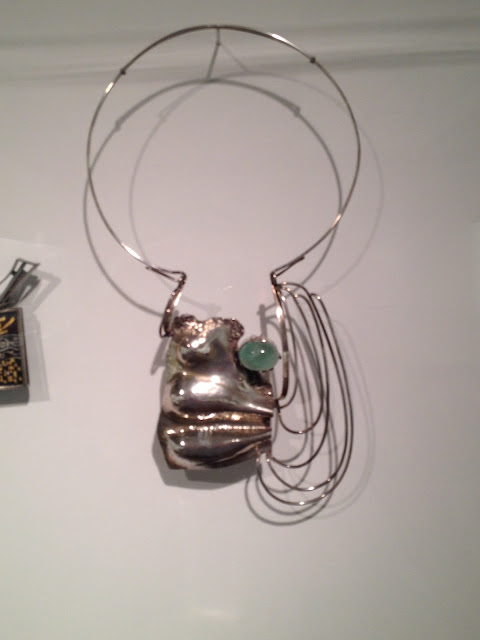 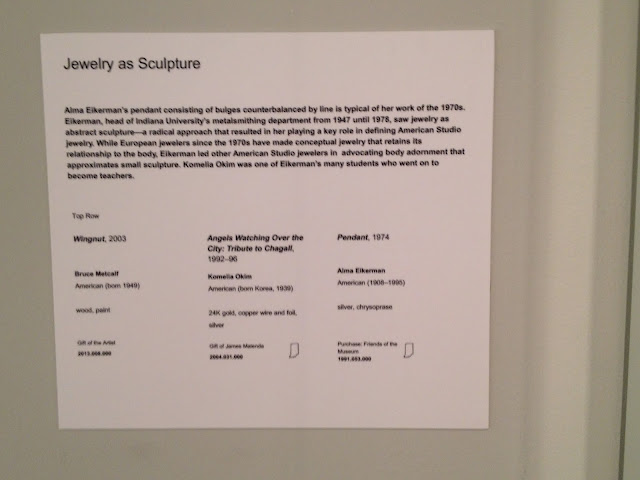 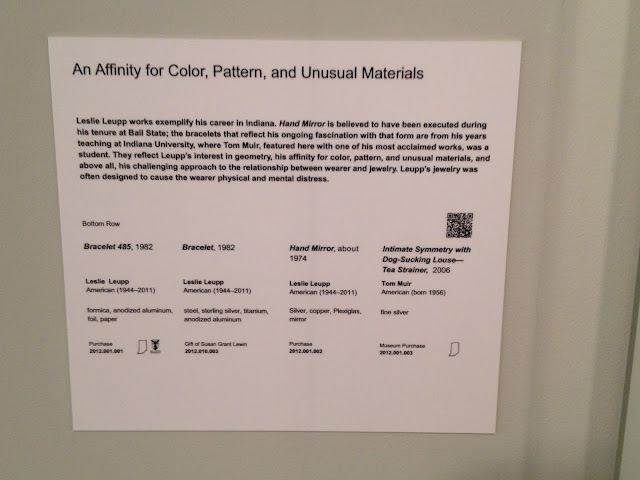 Centers for Contemporary Craft in America

Unlike in the fine arts world where activity since 1945 has centered around New York, developments in contemporary craft largely have occurred around American educational institutions-primarily because many of the leading makers were employed by universities. Seattle, for instances, since the 1970s has been a mecca for contemporary glass because of its proximity to Pilchuck Glass Center, the summer glass program founded by Dale Chihuly.

The Midwest-including the state of Indiana-has provided a nurturing environment for contemporary crafts. Michigan is home to Cranbrook Academy of Art, one of the most important centers for graduate level craft education in this country-playing a critical role in the maturation of such seminal figures as ceramists Toshiko Takaezu. Similarly, for many years one of the leading clay programs in America was at Missouri's Kansas City Art Institute headed by Ken Ferguson-aided, at times, by studio assistant Ben Bates. Because of resident potter Warren MacKenzie and disciples such as Linda Christianson, a 2008 Ball State visiting artist, Minnesota remains a hub for functional Studio pottery. Similarly, although production potter Byron Temple primarily worked in New Jersey, his introduction to the potter's wheel occurred at Ball State. Finally, Alma Eikerman's revolutionary metalwork program at Indiana University, established in 1947, broke with prevailing thought and established jewelry and metalwork as sculpture rather than functional form. 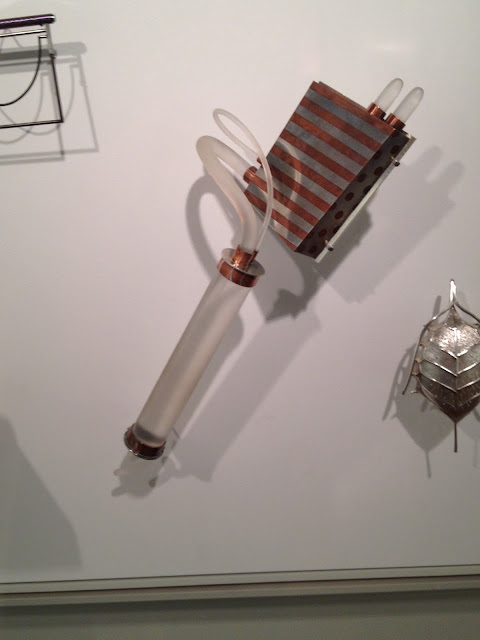 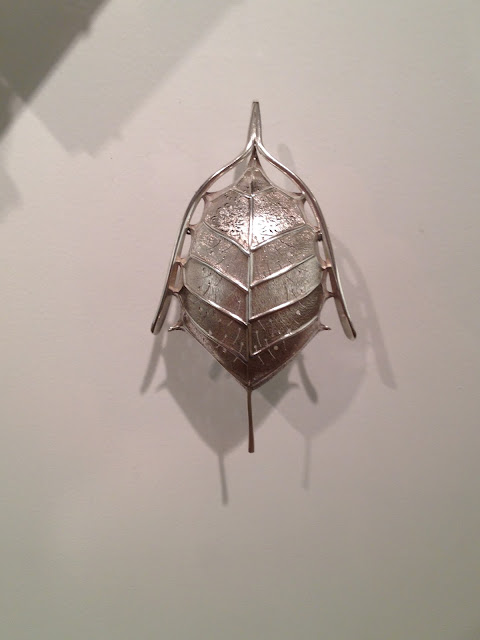 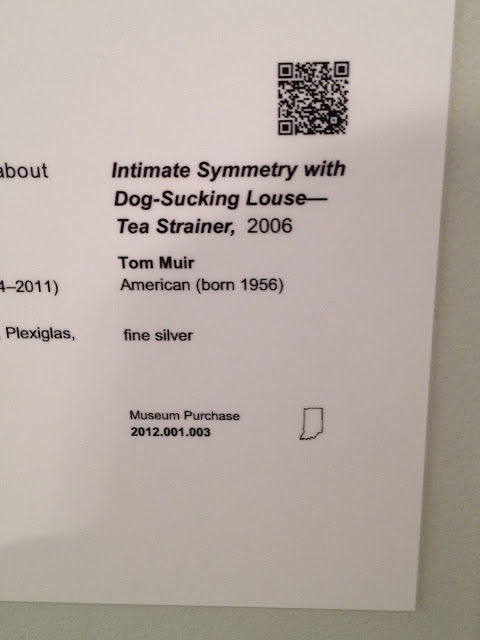 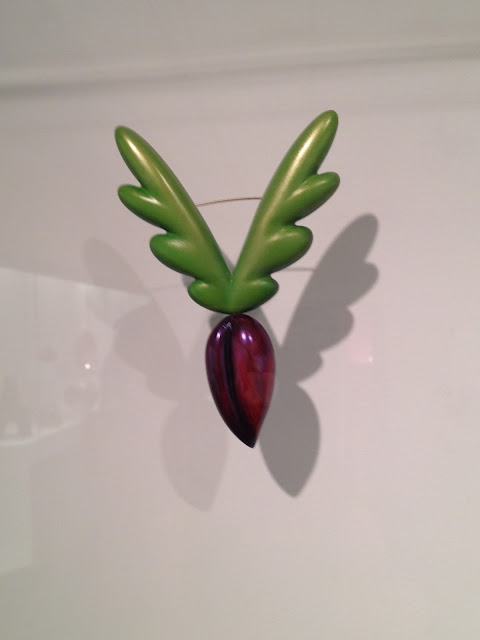 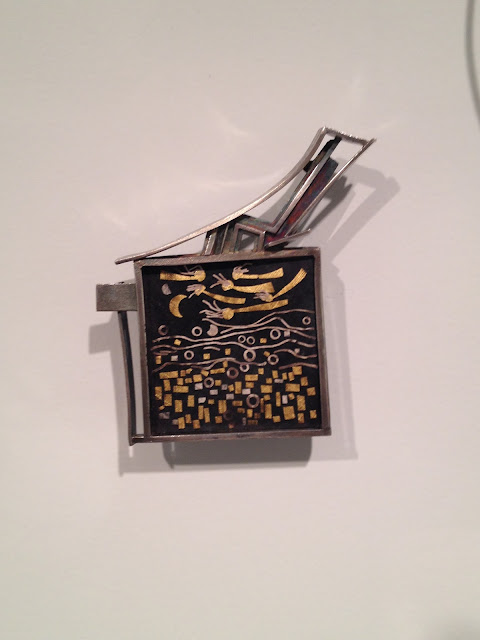 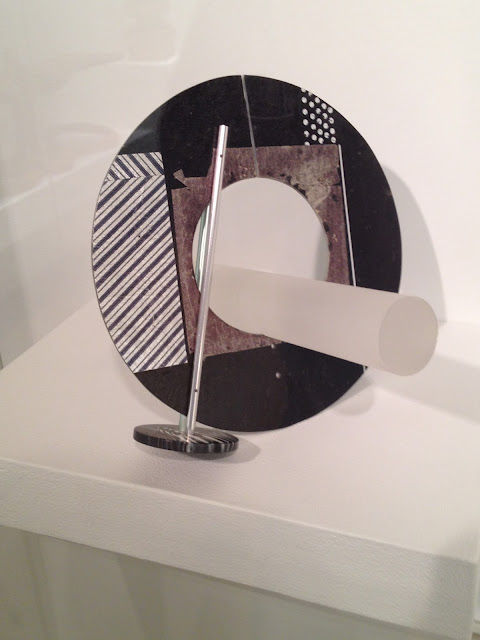 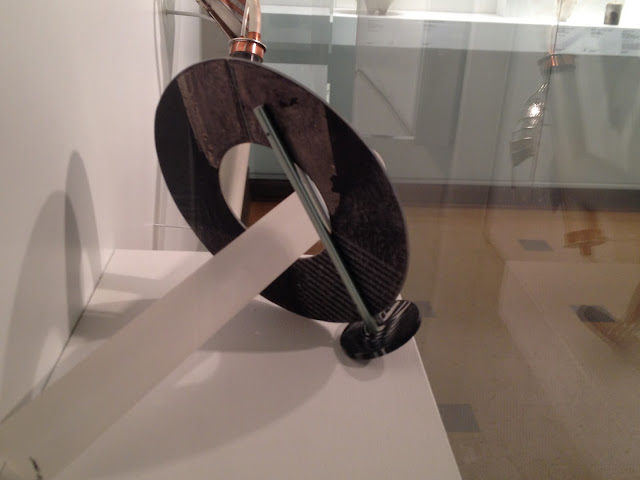 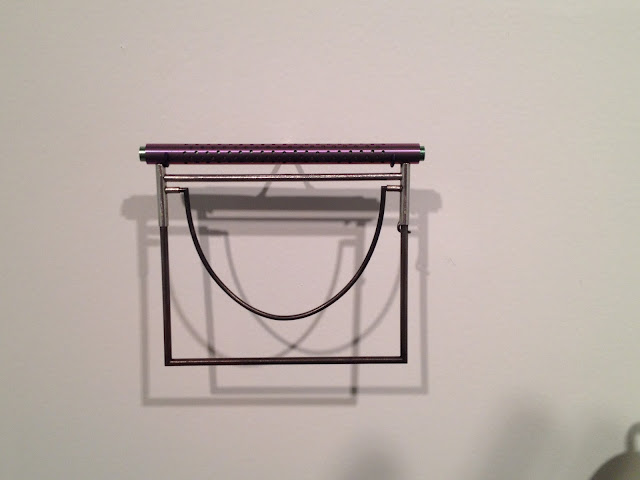 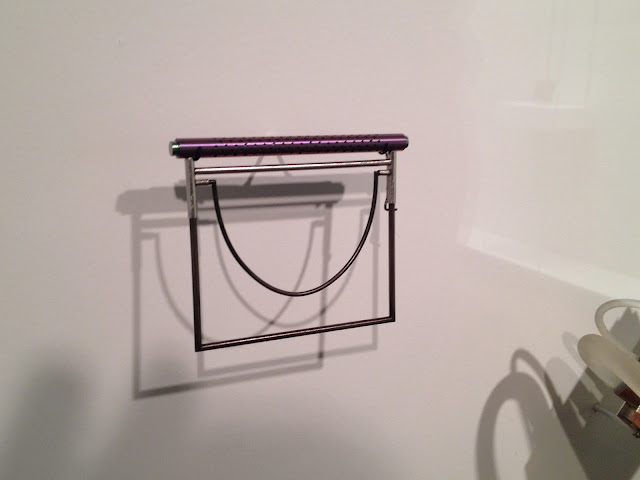 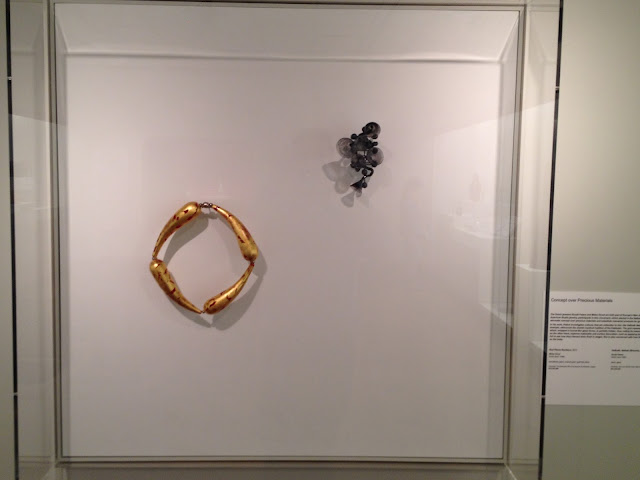 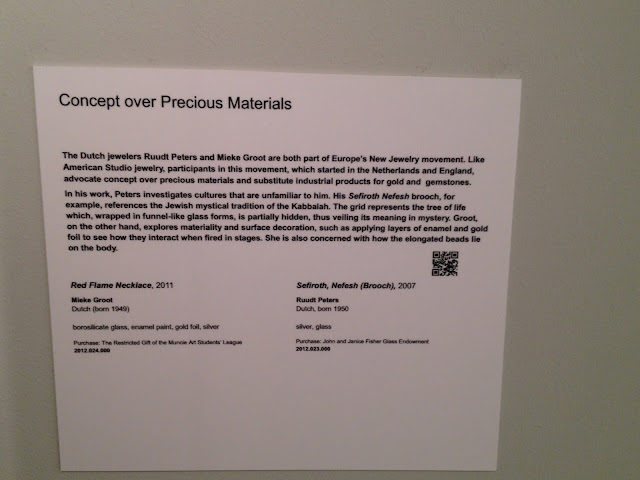 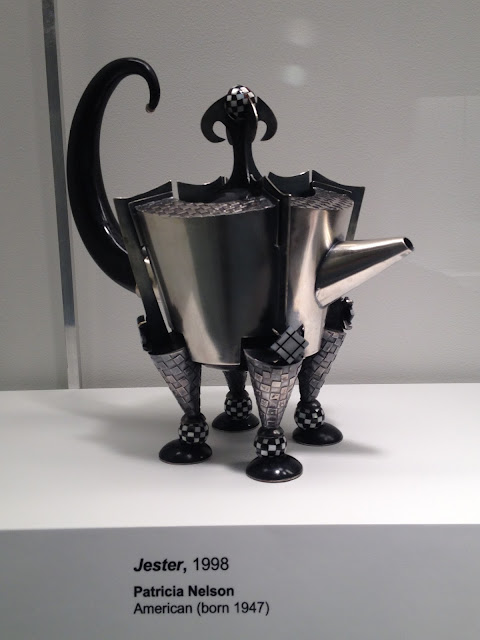 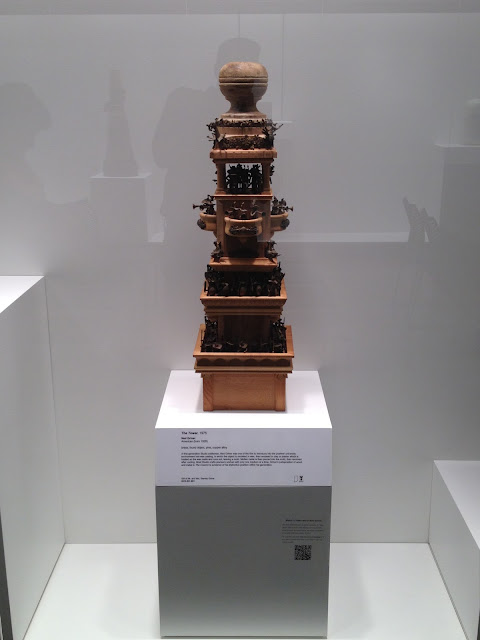 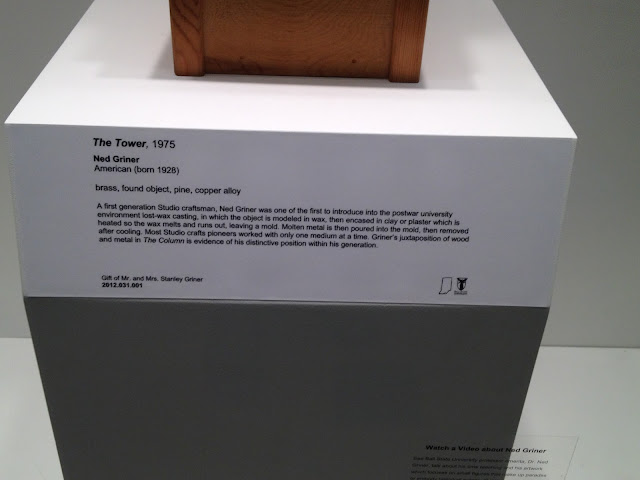 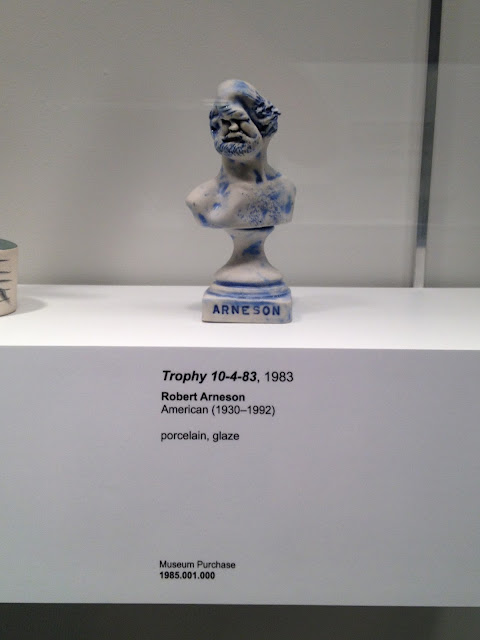 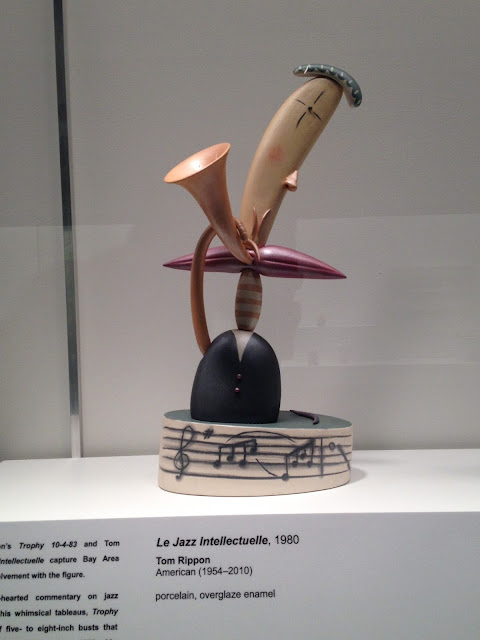 I enjoyed viewing the Contemporary Craft Collection in the David Owsley Museum of Art. I was especially taken by the Leslie Leupp jewelry. I believe I remember seeing these pieces in my first metals textbook by Chuck Evans, Jewelry: Contemporary Design and Technique (I don't own a copy of this text so I just ordered it); I know for certain  there were pictures of Leslie's pieces on the wall in the little EIU metals studio. Those pieces opened my eyes and made me aware of a completely different world when it comes to metalwork and my assumptions of jewelry and function. A lot of Leslie's work was anodized so it has been a big influence on my work. Leslie Leupp taught my undergraduate metals professor David Griffin at Texas Tech as well as my graduate metals professor Billie Theide while she was studying at Indiana University. Billie also studied under Alma Eikerman at IU so these pieces are a part of my metalsmithing and contemporary craft roots. I spent a lot of time in this particular room of the museum and wished desperately that I had my dslr camera with me. I guess I'll have to take a trip back there in the future.

Posted by Frankie Flood at 5:09 PM