So, I'm teaching casting this semester. We've been working on sand casting for the first few weeks and then I've slowly been trying to work on making some additions to the studio so I can be ready for the students to start investment casting. When Arthur was here at App State he added the vacuum casting unit that you see below. This is a sweet setup for the money and allows a better casting procedure than just a straight gravity pour. 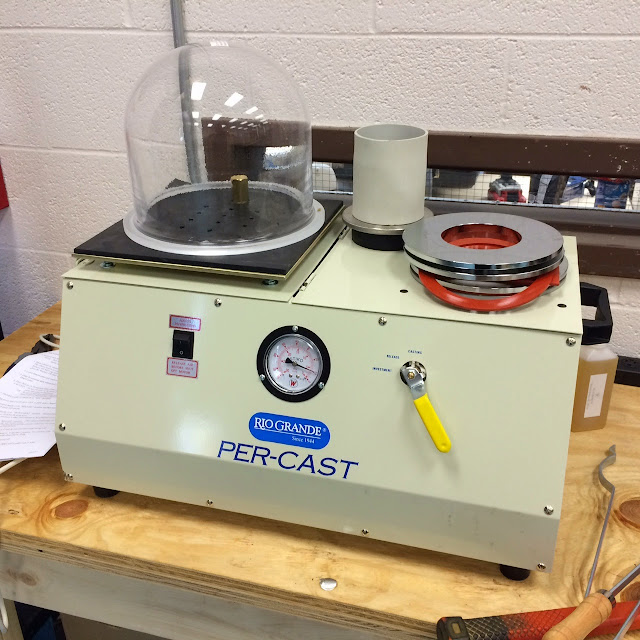 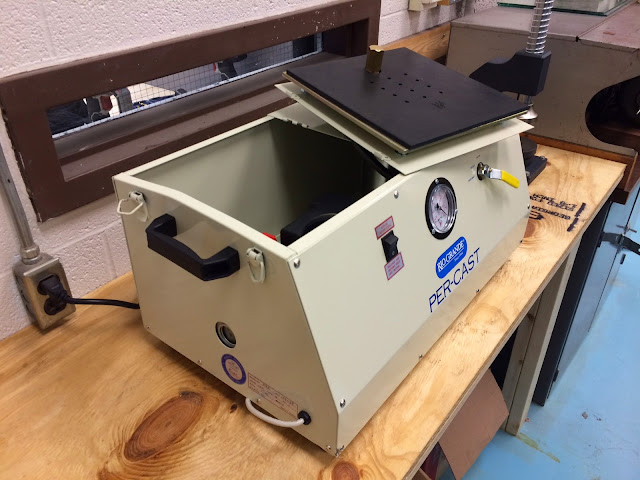 Marissa mentioned to me that she was planning on setting up a broken arm style centrifugal casting machine and that I would need to complete the install on, since she had purchased a new surround for the older wind up unit that was present in the studio. I think her or Adam must have also constructed a wood base for it. 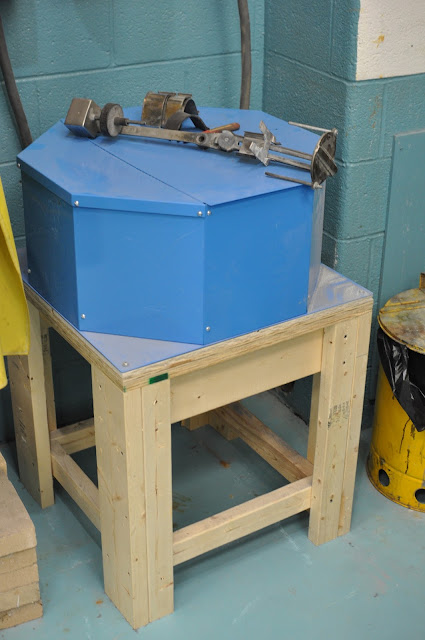 I had a Sculpture student (Hunter) who wanted to investment cast some insects. I advised her to cast these with the centrifugal casting machine due to the fine detail, but after determining flask size, I discovered that our casting machine couldn't handle the larger flasks that we have. We happened to have some larger broken arm pieces that I could put on the wind up base, but the surround we had would not allow these to be used. In addition, I really hate casting with the wind up arms, with newbie students as I'm afraid for my life. I count on some serious teamwork, to get the metal up to temp with the oxy acetylene, to pull the pin, to keep the tension on the casting arm; and to then orchestrate a simultaneous release of the arm and exit of the torch. Did I mention we also have to close the lid on the machine directly after this? I'm pretty much asking to have molten metal flung at me in this situation. 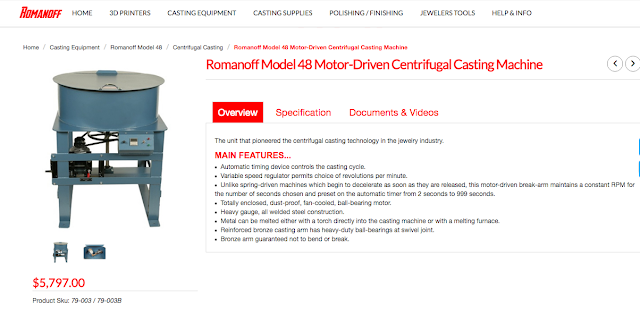 I decided to price an electric motor driven centrifugal casting machine. Romanoff and Arbe make a unit that contains a switch that spins the broken arm machine up as the lid is closed, and you can even set a timer for the length of time the machine runs. This is great for metals that retain the heat of the flask that has just come out of the kiln as you can just have the machine spin for a predetermined length of time to insure that the metal has solidified before stopping the spin. I used a unit like this when I was in graduate school and this is what we had in Milwaukee. I realized quickly upon looking at the websites that I would never be able to afford one of these without a grant as it's just not in my budget. The Romanoff unit was priced at almost 6 grand!

My next option was to build an electric motor driven unit using the parts I had and some scrap steel. Honestly, though I just didn't/ don't have the time to get this done. I took a break from the idea and decided that we would just make due with what we have.

This past Sunday, the thought crossed my mind to see if anyone had ever built one from scratch and while I was at it, I decided to do a search for parts on ebay. Low and behold a complete Romanoff unit was currently on ebay for $250. It was a little rusty, but the description said that it as in working order. The only thing needed was a paintjob. The auction was no shipping and local pick-up only, but the machine happened to be located in Franklin, WI (just outside the city of Milwaukee). I texted John and asked him if he might be able to pick it up so I could later figure out shipping from him. Being the amazing friend that he is, he said "sure thing".  I pulled the trigger on it, and then arranged for John to be able to pick up from the owner this past Tuesday night. In the meantime, I placed an add on Uship to see if anyone would be willing to bring it to Boone. This was a longshot but I figured it was worth a try.

As John is on his way to pick up this past Tuesday around 5:00, we talk and he asks what he is supposed to do with this heavy beast of machine until I can arrange for shipping. I told him I was working as fast as I could but the Uship add had only been on for a day or two. I told him I'd figure out something. As soon as I got off the phone, I got an offer to ship for a very reasonable price, but the shipper was coming through Milwaukee in 45 minutes. I accepted the bid and  arranged for pick up with John. The owner of the machine threw in a wax injector for free when John picked up the machine. The shippers picked up the casting machine later in the night.

Today at 6:00 after class, I get a message from John saying that the shippers contacted him and needed my address. The shippers were in North Carolina as they had driven through the night and they were getting close to Boone! Jill picked me up from work so we could get the kids to bed, and then I drove back to work to meet the shippers.

They arrived and we unloaded the machine and had a good time chatting and then they were on their way. I moved the casting machine into the Metals studio and positioned next to the giant Vcella burn out kiln that Adam and I moved into the studio a few weeks ago (what a kiln by the way; it's HUGE!). The Romanoff unit fits like a glove in the ventilation hood and I plugged it in and it works great! It has an old school timer, but it works flawlessly. I'll need to make some flask cradles  for it and clean up the surface rust, but this is going to be excellent. 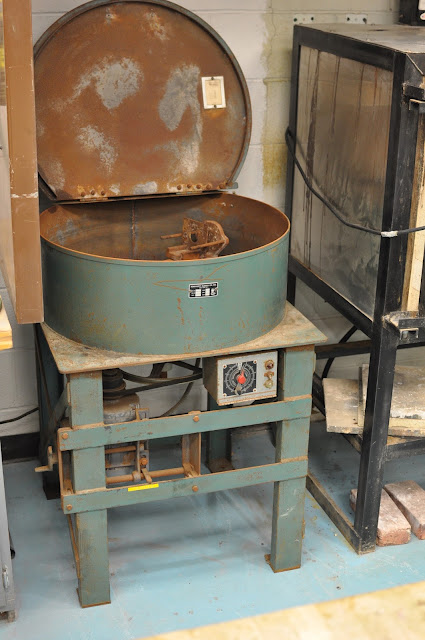 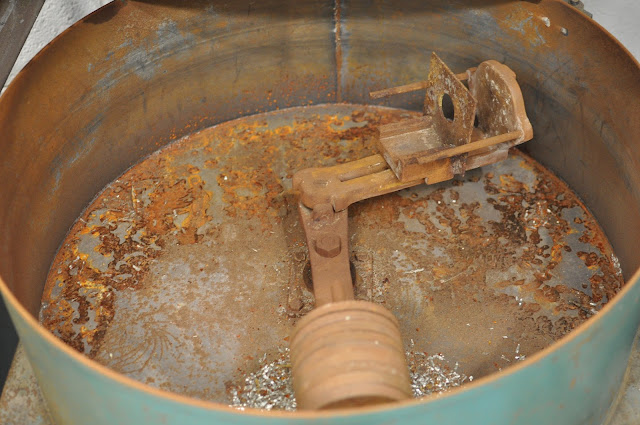 I'll need to wire brush the inside and give everything a cleaning and a coat of paint, but this is going to be such a great tool! We can use our larger flasks and I don't have to be afraid for my life when we're casting. This is a major upgrade to our casting equipment regardless of how the machine might appear. 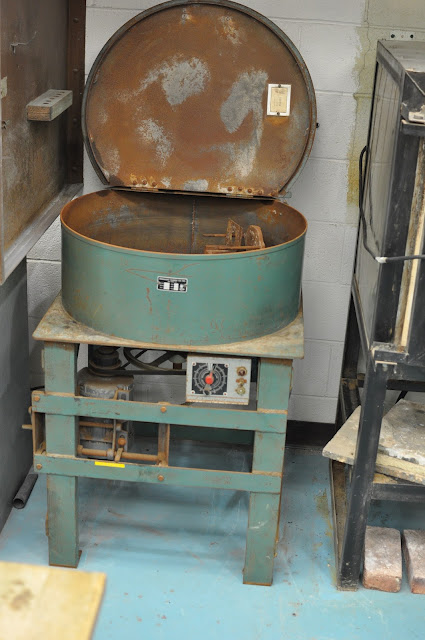 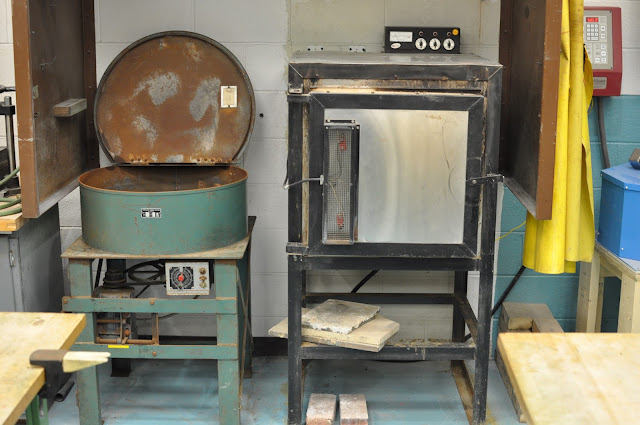 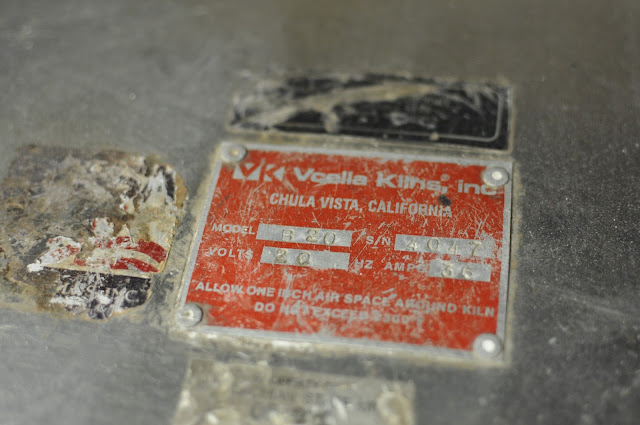 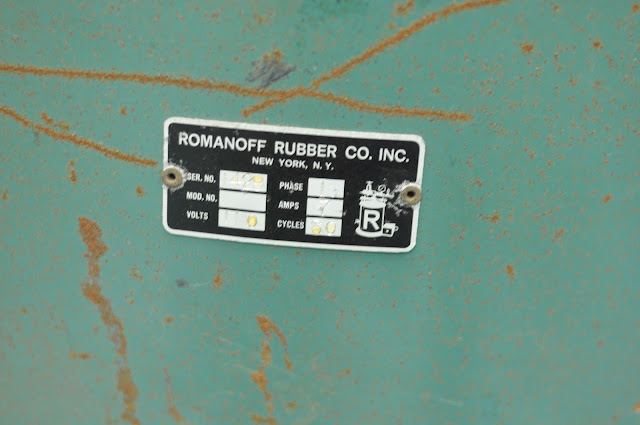 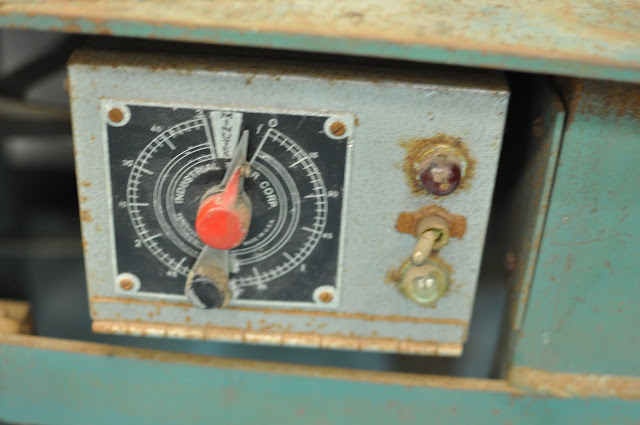 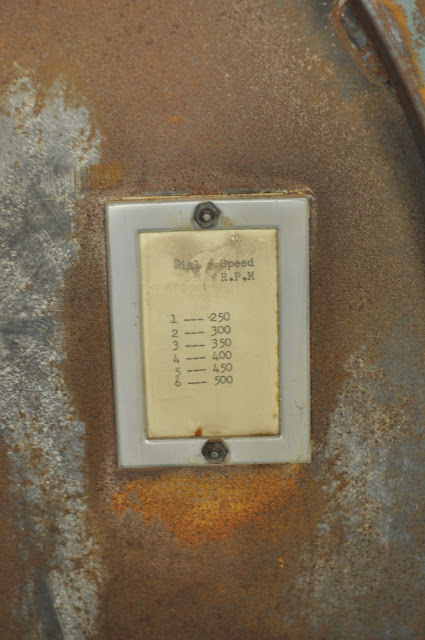 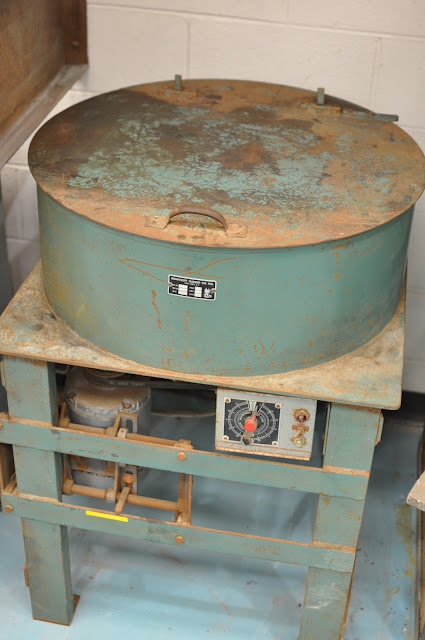 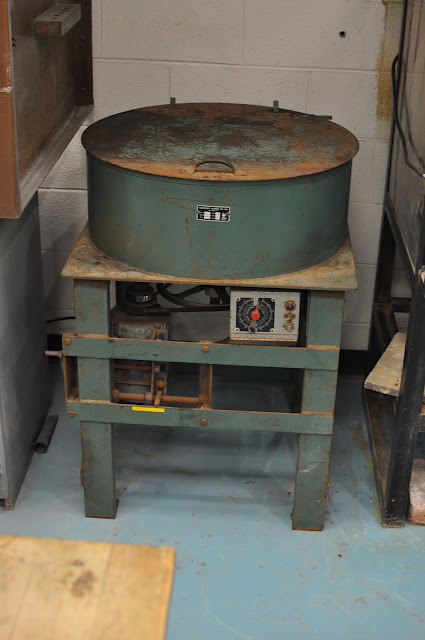 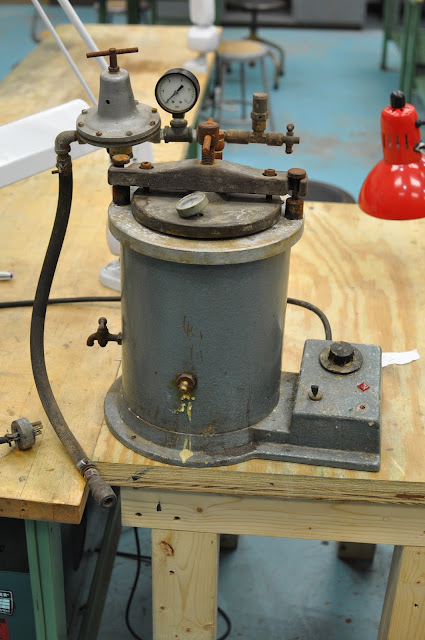 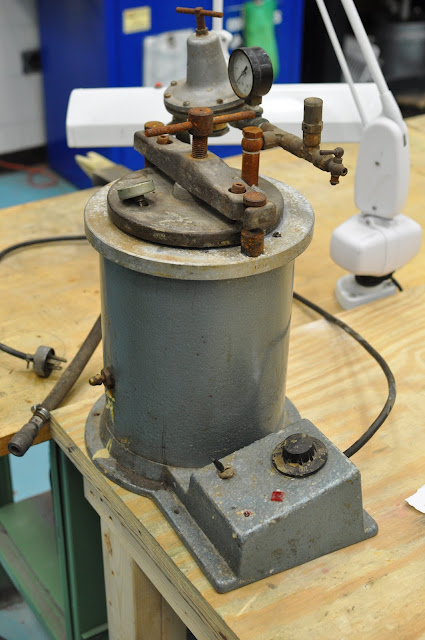 As I mentioned a free wax injector was included. Score! 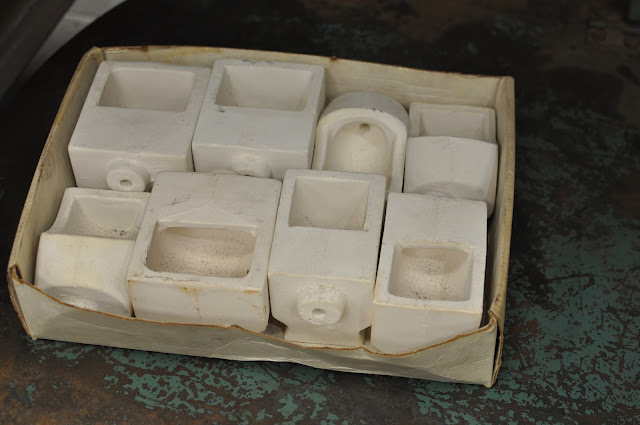 Also an entire box of crucibles of various sizes was included. What a deal!

So in less than two days, I get this fine machine dropped at my door with the help of John, two amazingly quick Uship shippers, and a little luck on ebay. Sometimes the deals are just too good to be true...  A GIANT thanks to goes out to John for making this happen! Once again, I owe you, "little buddy"! I'll think of You and this "too good to be true" story every time I melt some metal and escape the experience unscathed. Thanks my friend!

I begged to get that kiln in there!!! I am glad it finally happened. Happy casting!!!

That kiln is so crazy large; I couldn't believe it when I first saw it. I'm so glad I was able to relocate it; It just made sense to do it. Glad to hear it was on your list of things to do as well.

Hi,
I have a very similar machine of about the same age that I'm wondering if you could help me figure something out. It has a lever to adjust the RPMs, but it isn't connected to anything. I'd like to add the variable speed back to the machine if possible. Would you mind uploading or sending me some pictures of how your speed control works with your motor?
Kristen Van Patten