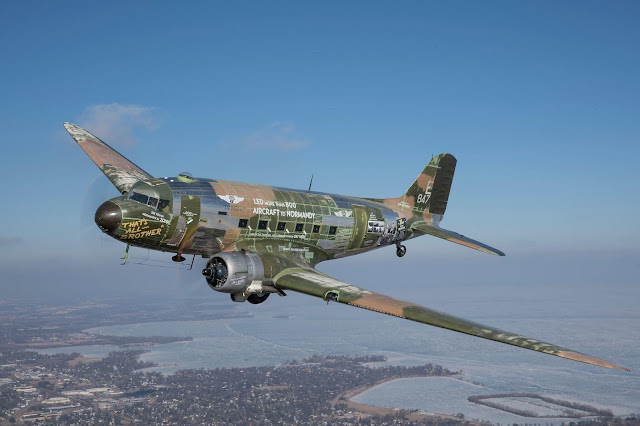 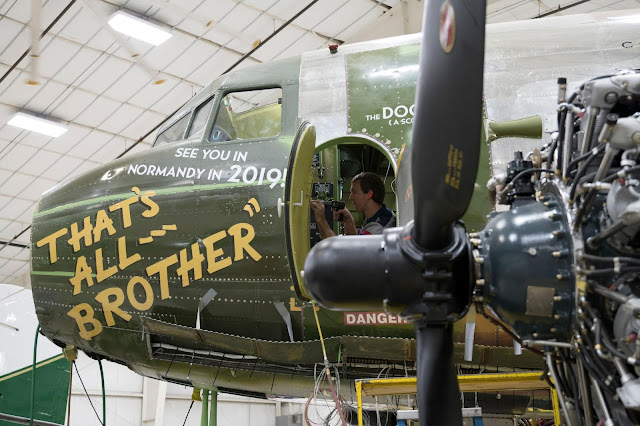 Michael just sent me info about "That's All Brother"; the first plane into Normandy. He has helped out with this plane and tours at EAA. What an amazing story! It would be awesome to see it in Normandy. Basler in Oshkosh did the restoration on the airframe. The NY Times did a story on it. Looks like the plane was almost lost. Such a great story!

Posted by Frankie Flood at 2:47 PM

Thanks for the mention! We're exceptionally proud of the plane, and it boggles my mind that this is the _very_ aircraft that /led the entire liberation of Europe/. I can't really wrap my head around that successfully, and many people who toured the plane had the same faraway look of contemplation that I'm sure I do when I've been lucky enough to work on her. There's one brief story I haven't mentioned publicly yet about being a tour guide for the plane, but feel I should, as it deserves to be remembered by more than just myself.

Saturday at Oshkosh is the busiest day of the whole week in terms of attendance, so I helped out with tours of "That's All Brother" for a solid chunk of the day (getting to watch the Blue Angels from the cockpit was a truly unique experience). We had all sorts of people come through on the tours - some had contributed to the Kickstarter for the restoration (a huge 'thank you' to those folks), some had no idea what the airplane was until its significance was explained, some were themselves old C-47 pilots (and we raptly paid attention to every detail of their stories), and we even had the president of Botswana come through for a tour.

But the most memorable part was late in the day when we were packing things up. There was a young man there (around 14 years old) who had wanted to tour the plane, but arrived too late, as we had already closed it up for the day. No matter, another one of the CAF guides and I happily chatted with him about what we knew of the plane's discovery, as he had a great interest in history. We talked about how many new things about WWII were still being found all the time, and how many more discoveries like this plane are still out there, waiting for someone to find them.

At some point in our discussion of history, he mentioned somewhat offhandedly that he was Jewish, and that most of his family on his mother's side had been wiped out in the Holocaust. My fellow tour guide and I felt like all the air in our lungs had just been depleted. That simple statement, here, in front of this specific airplane... We looked at each other briefly and then asked the young man if he would please allow us to give him a tour of our aircraft, and he accepted. I'm not sure what his thoughts were as we showed him around the inside, but his face was contemplative, as were ours. He graciously thanked us afterwards, and disappeared off into the crowd for the night air show.

That's going to stick with me for a very long time.

I just read this to Jill and it brought her to tears. Stories like this and about WWII holds a special place in our hearts as Jill's grandparents met during WWII in England. Her Nan was about as British as British can be. She worked at Perilli's as a young girl and was an air-raid warden in Southampton and often mentioned working on wiring harnesses for military planes (either bombers or Spitfires) at the factory. She would have loved this story and would have been very proud of you for your work and for sharing time with this young man.

I told Jill you have got to be one of the best people I am proud to know!!