Today, I gave my Montesa Cota 348 a tune up. When I was finished I figured I should get back on the Montesa Cota 123 that I got for Noah so long ago. Last year we were able to finally get it running after I located a head pipe for it. I was thrilled that we got the electronics sorted and that we had spark, but soon my excitement was diminished after the initial elation of hearing it run as we had only first and second gear. In my complete tear down of the engine, I had assembled something wrong. Thinking I would need to split the cases to rectify the situation, we packed the bike away until another day. Then we got busy with moving into our new house and the bike sits.

Well today, I worked up the courage to investigate. I went to remove the side cover case screws and promptly stripped one of the flat head screws. I ended up having to drill it out; I swear this bike hates me! Anyway, I removed the cover and popped the clutch pack off so I could inspect the shifting mechanism and then decided to see if I could shift through the gears once the selector rail was disconnected. Sure enough I had 6 speeds and neutral as I should. This meant that the cases would not need to be split and the problem was in my shifter pawl alignment. There is just very little info on rebuilding these bikes. I decided to try an internet search regardless of trying to search for such things in the past. Much to my surprise I found a French forum that had details on putting things back proper. With a little help from Google Translator and I have some useable information. A copy of the forum follows for future reference. I was able to get things back together and I still have all 6 gears. I just need to re seat the clutch and I should be in business.  I also placed a reminder here about the washer that belongs behind the clutch. Finally....

Hello everyone,
in the continuity of the restoration of my Cota 123 T of 76 (it seems to me), after having restored the stator, rectified the selector shaft, repaired its shoulder in the right half casing (s' was torn off !!), here I am drying on the reassembly and the adjustment of the rotary plate holding the 2 pawls in the barrel. But hope, she coughed and started on the first meter of stroller.

By manipulating the bare barrel with pliers, the 6 speeds pass without false neutral or nothing. I reassemble the ratchet mechanism with the 2 open latches with the "tip" they form at noon, with the 2 brass seals, I put the pinion back on the square, making the pinion mark correspond with that of the rack . Selector recall is ok, but speeds are not 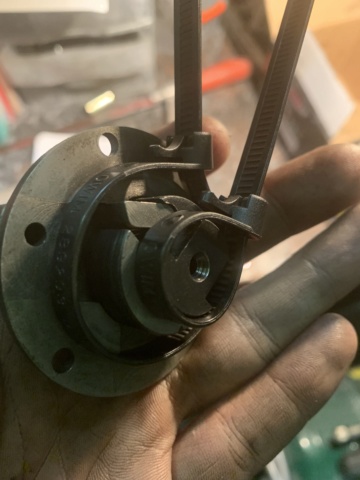 By exposing the barrel and turning the rear wheel, the 6 gears switch nickel to the clamp (photo below). Anyone know what to do to put the ratchet mechanism back in place in the barrel and then put the rack back on the square drive pinion? Thank you in advance, I completely dry after trying to put it in several different ways for a few hours ... HELP 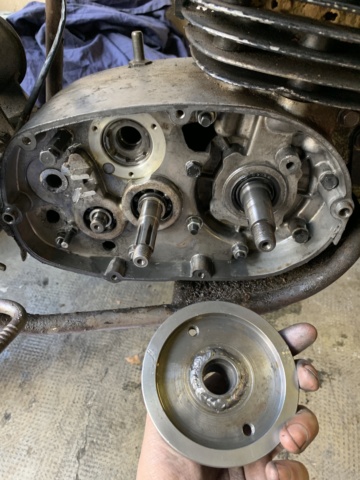 Thank you Esplugas, don't hesitate to communicate the coordinates of this Barcelona mechanic, it could always be useful to someone, starting with me, I go there regularly.

Otherwise, good news, I not only found how to go up and adjust this selection pawl, but also why once in place the gears no longer passed, how to solve this problem, and even in passing how to avoid the legendary spring leap selector callback. I took pictures for posterity.

To replace the selection pawl:

- beforehand, make sure that the speeds pass properly by directly activating the selection barrel (I use a botanical pruner whose large blades deviate enough). Do not hesitate to rotate the gearbox output pinion to unblock the passages. Test the 6 round trips and well on neutral, holding the primary shaft and turn the gearbox output. - close the pawls with your fingers and rotate so as to block the closed pawls behind the stops - present the assembly in front of the barrel with TWO thick brass washers, taking care to have the "small" tip of the pawl holder up - push everything in while "trying" to keep the holes in the washers aligned with the holes in the turntable (the round cover) 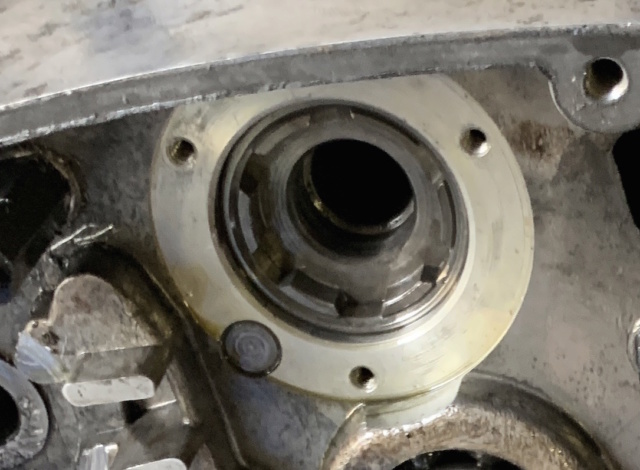 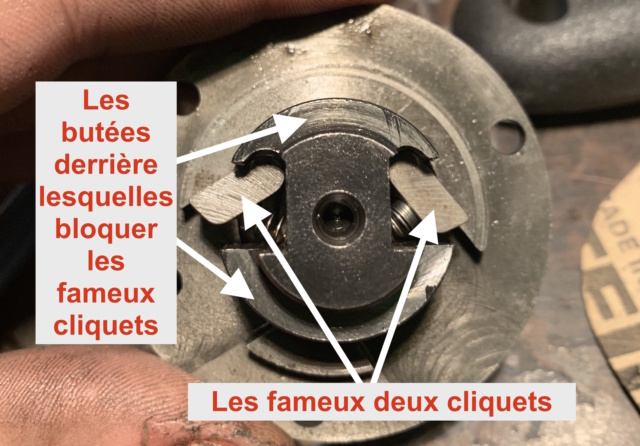 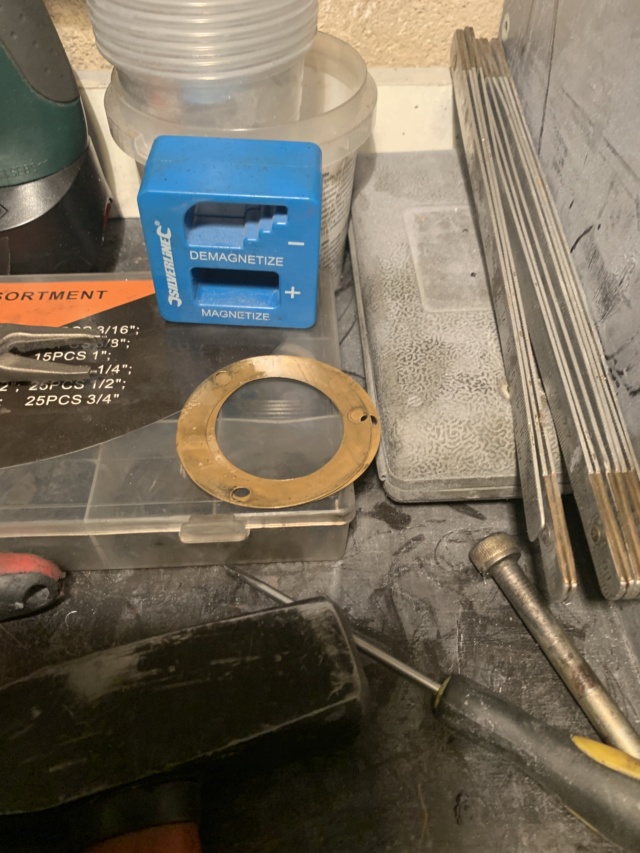 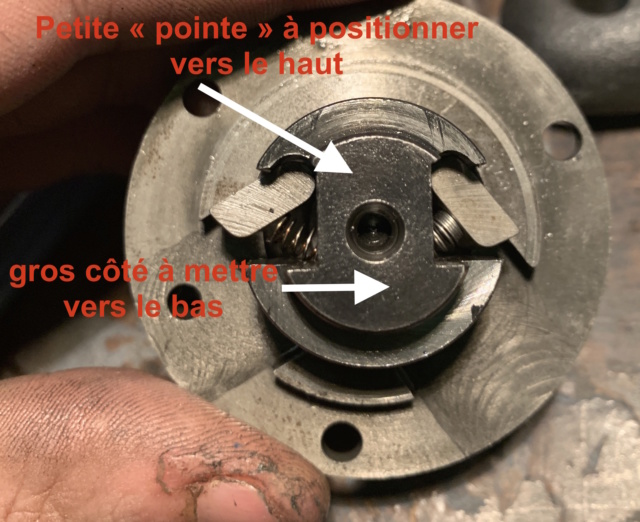 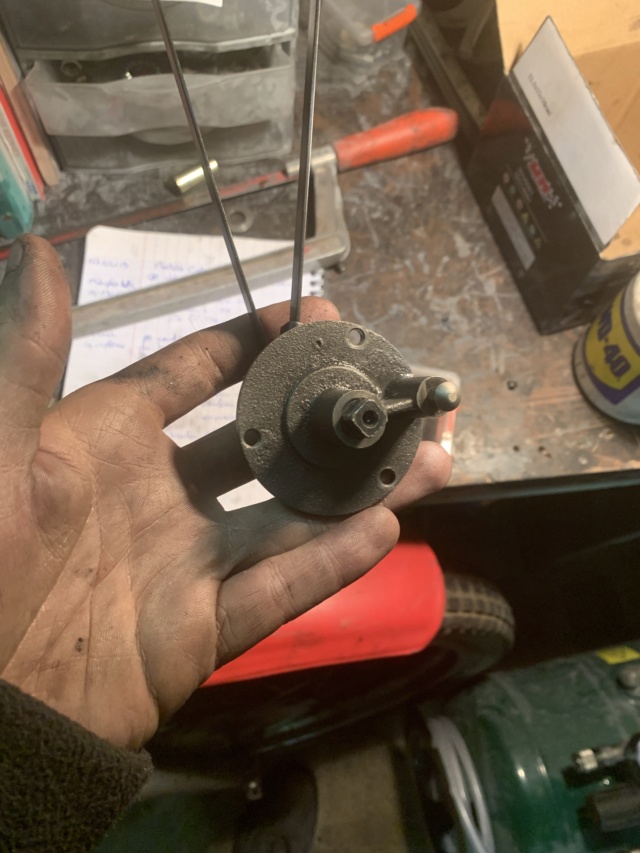 - slightly pull on the central square, which must not sink or turn, then hold it stationary in its exact position with pliers

- while holding the stationary square, rotate the turntable so that the stopper the rack ("comb") is at the bottom right and the holes aligned.

- replace and tighten the screws without excess, replace the pinion with its clip on the square by matching the pins on the pinion and the comb. Here is your selection reassembled, calibrated and adjusted. first thing to do, test! The other operations to come in pictures. 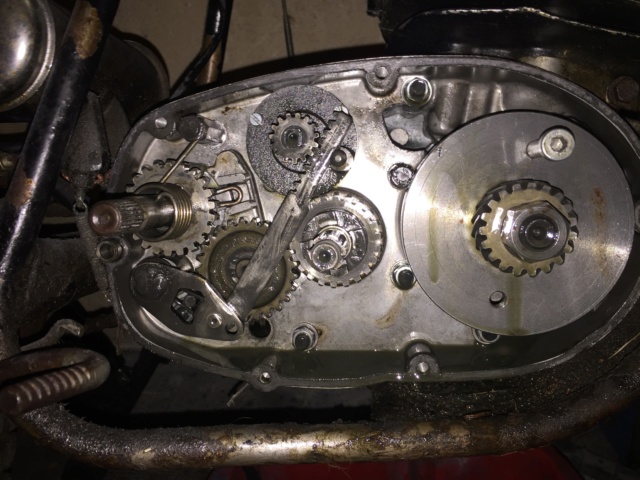 I am putting back a 123 cota road and I have a problem, on the technical review he says not to forget to put the spacer washer of 15.5x22x3 before putting back the plate and clutch .. ok

when I disassembled I did not find this washer.
I AM ATTACHING A PHOTO OF COTER CLUTCH. HERE is another image with the tray, To locate I put a copper washer and apparently this is where the spacer should be 15.5x22x3 mm Please tell me if this spacer washer is really in this axis, it is true that once the tray is set it's really right on the small gear side of the gear selection Voila 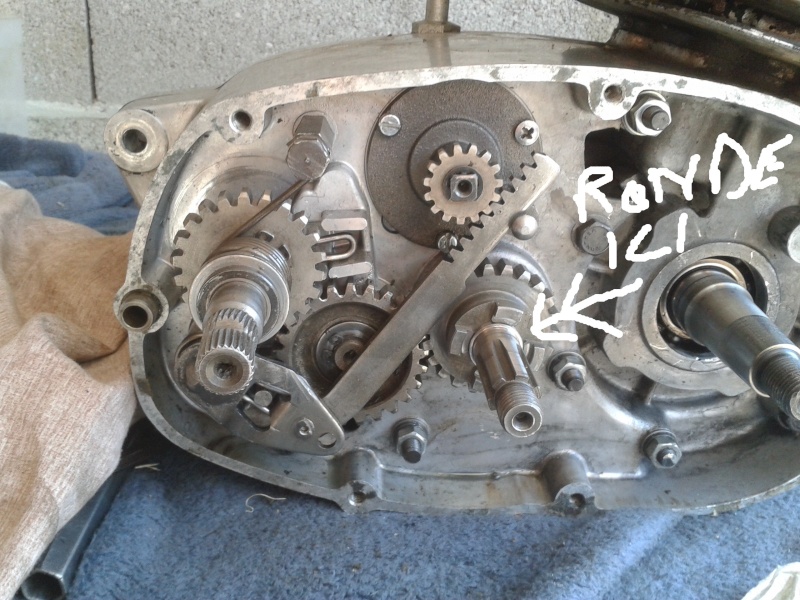 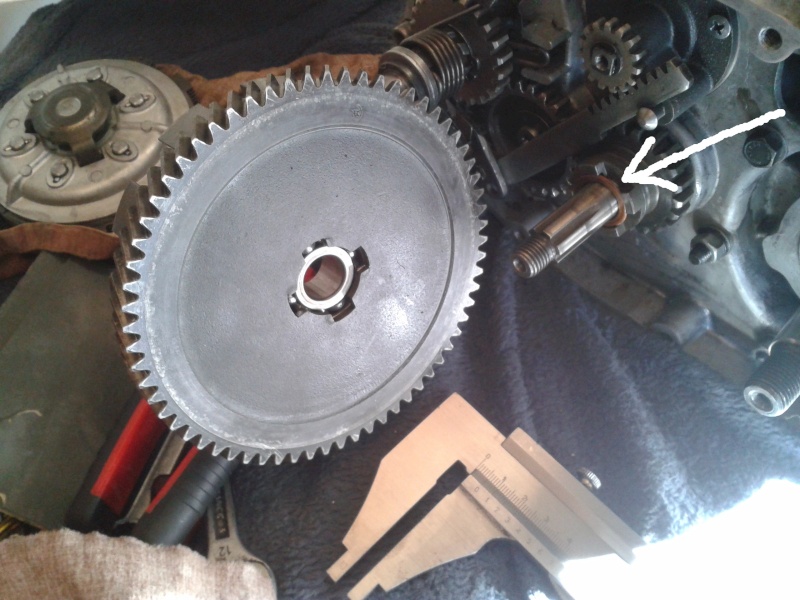 Posted by Frankie Flood at 8:57 PM