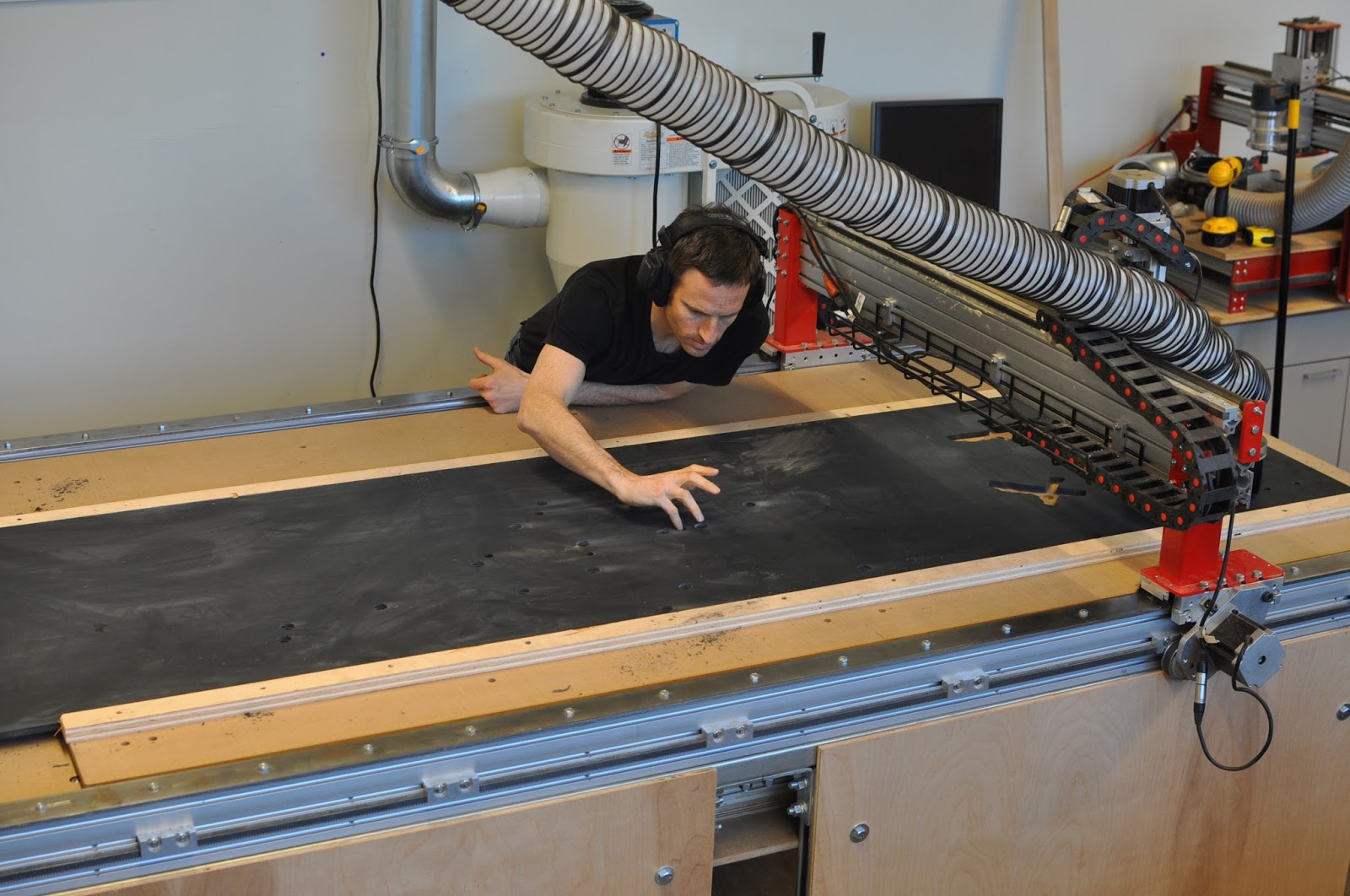 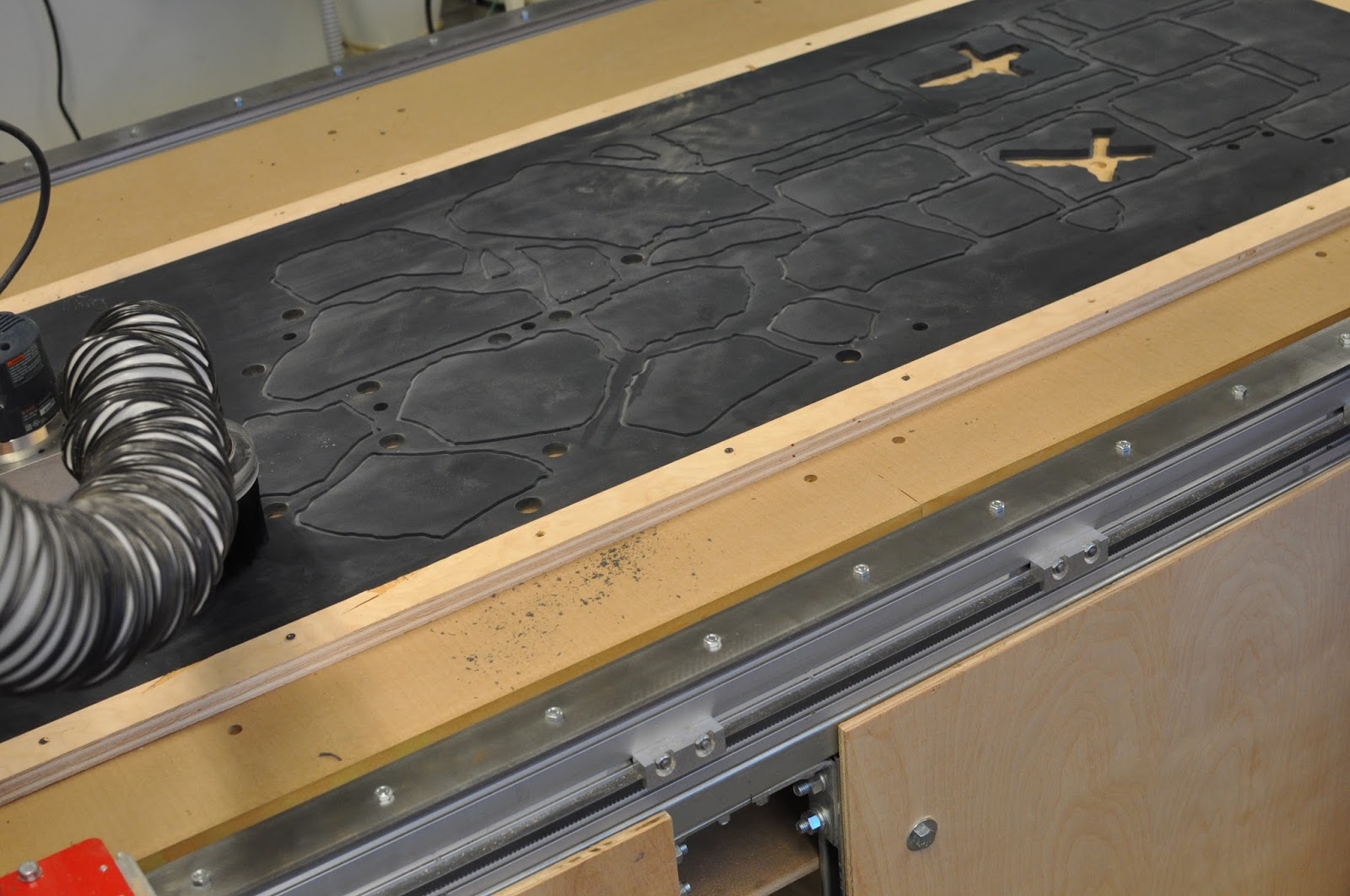 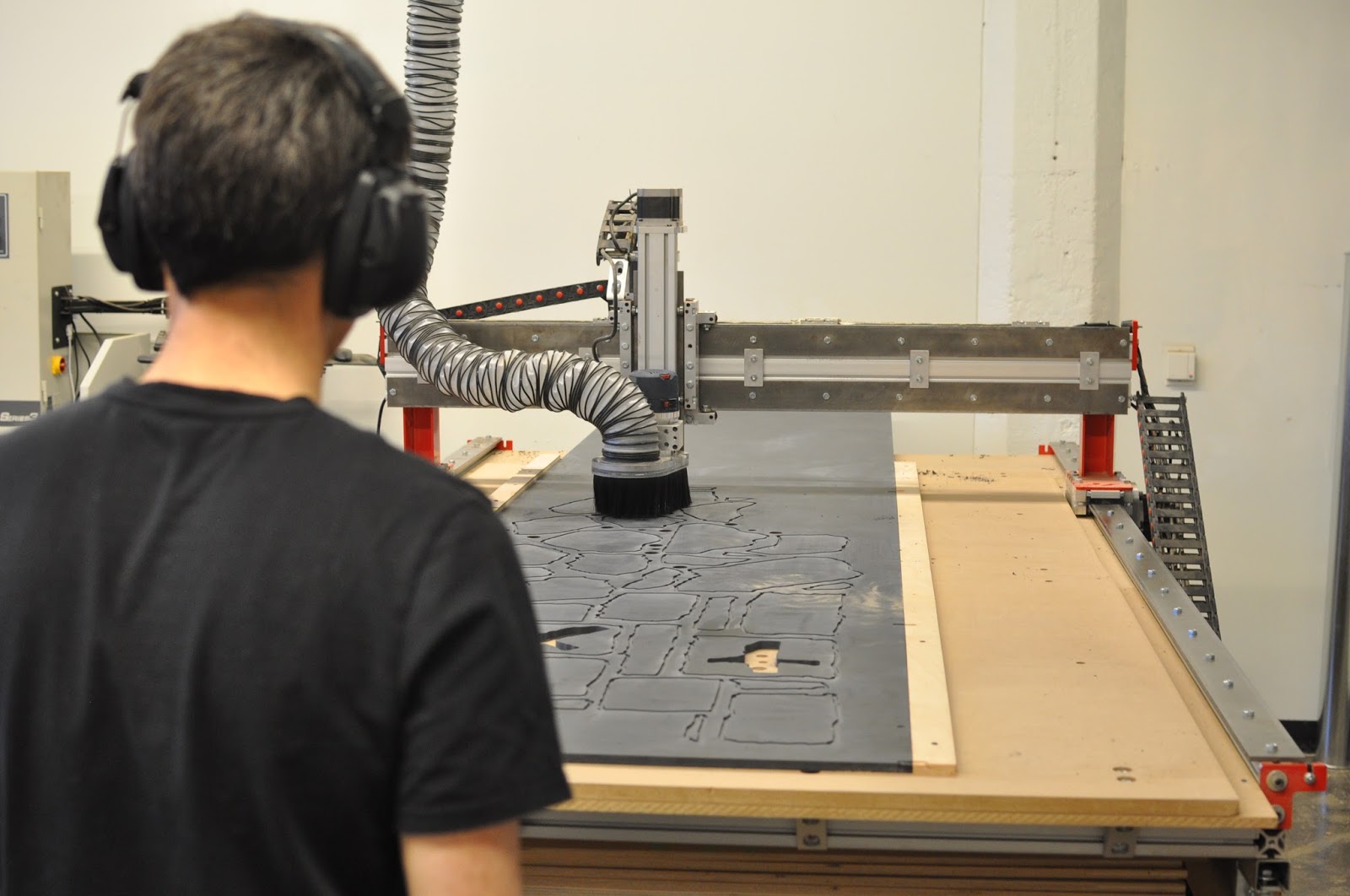 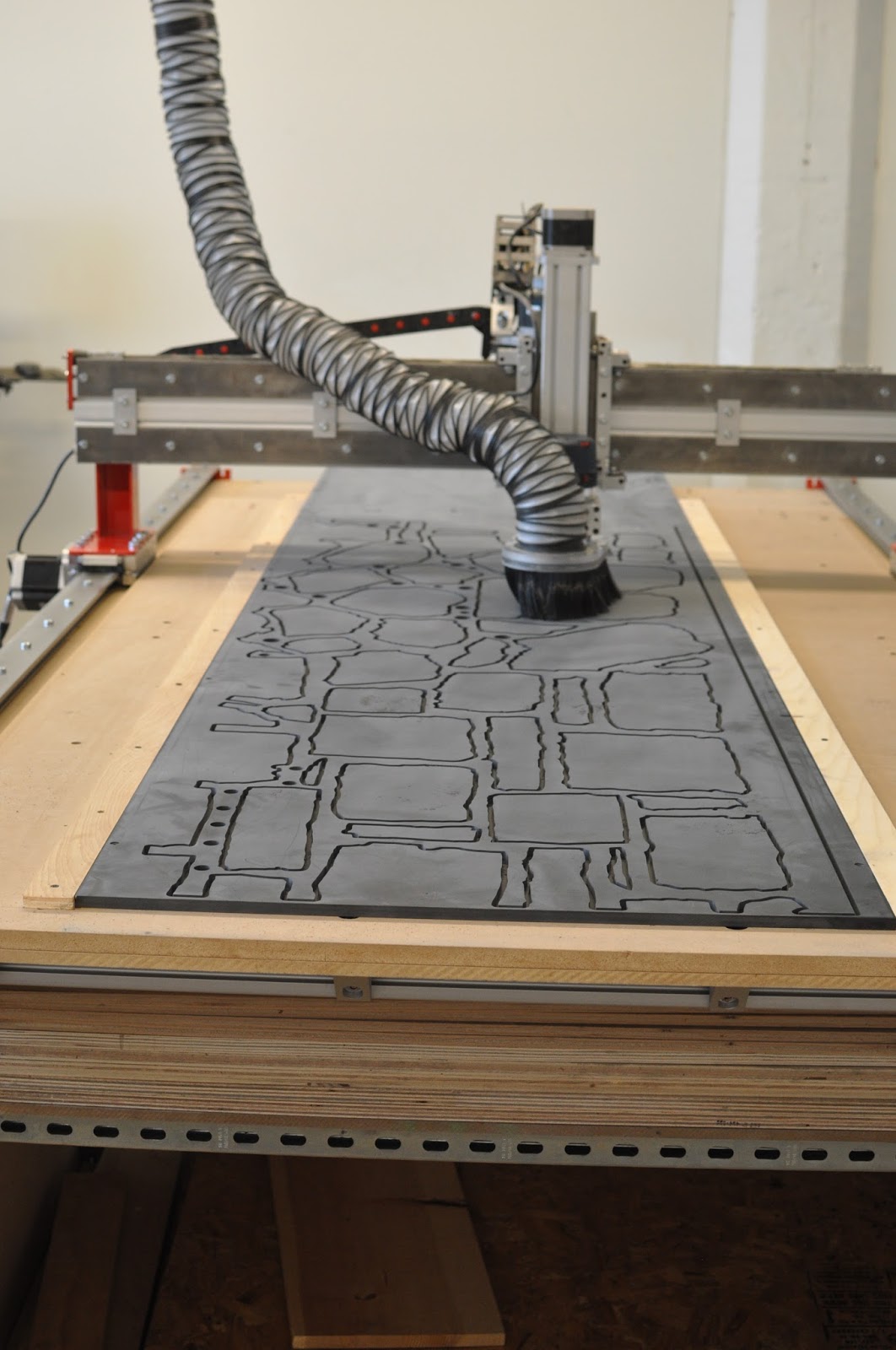 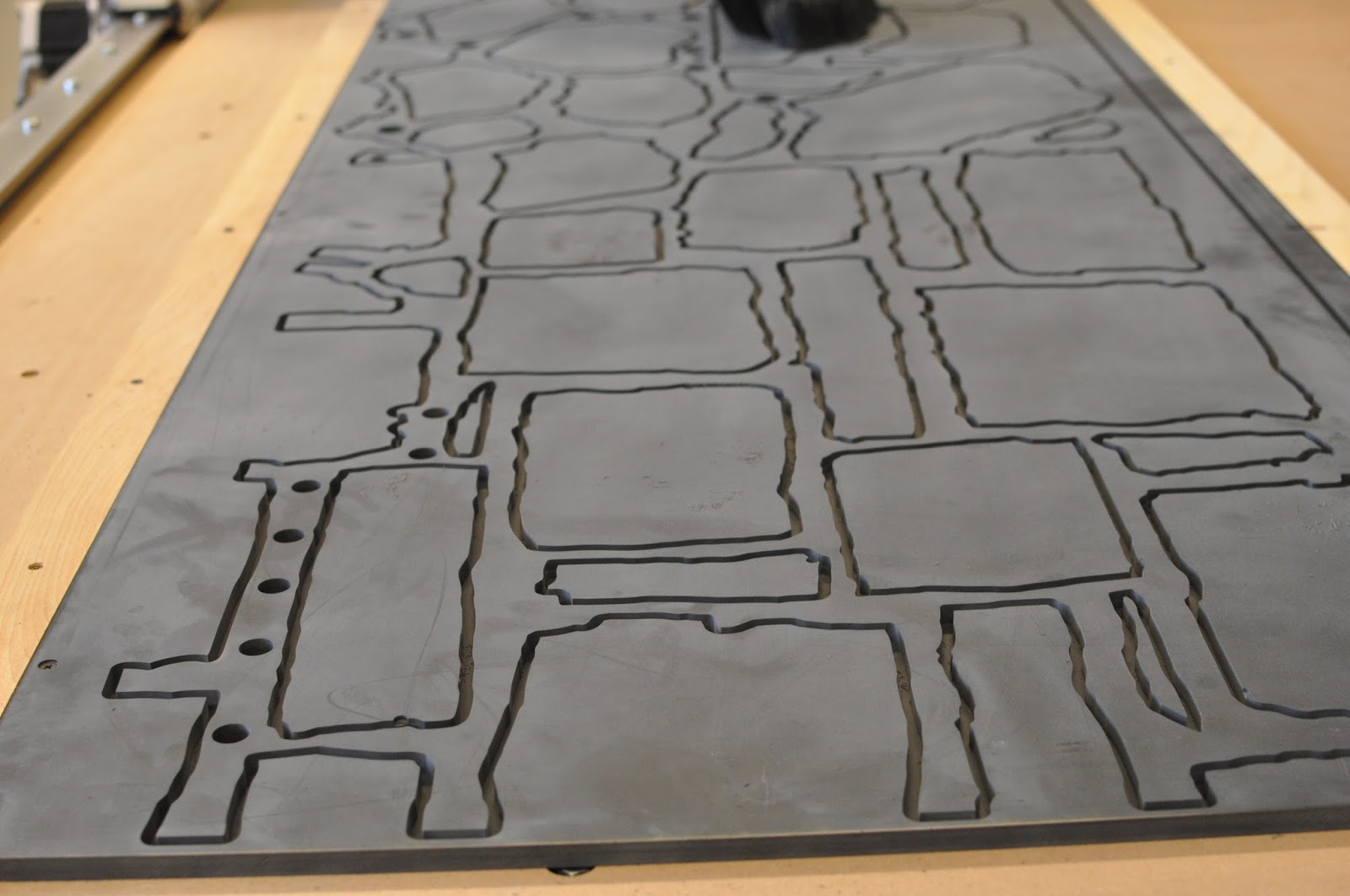 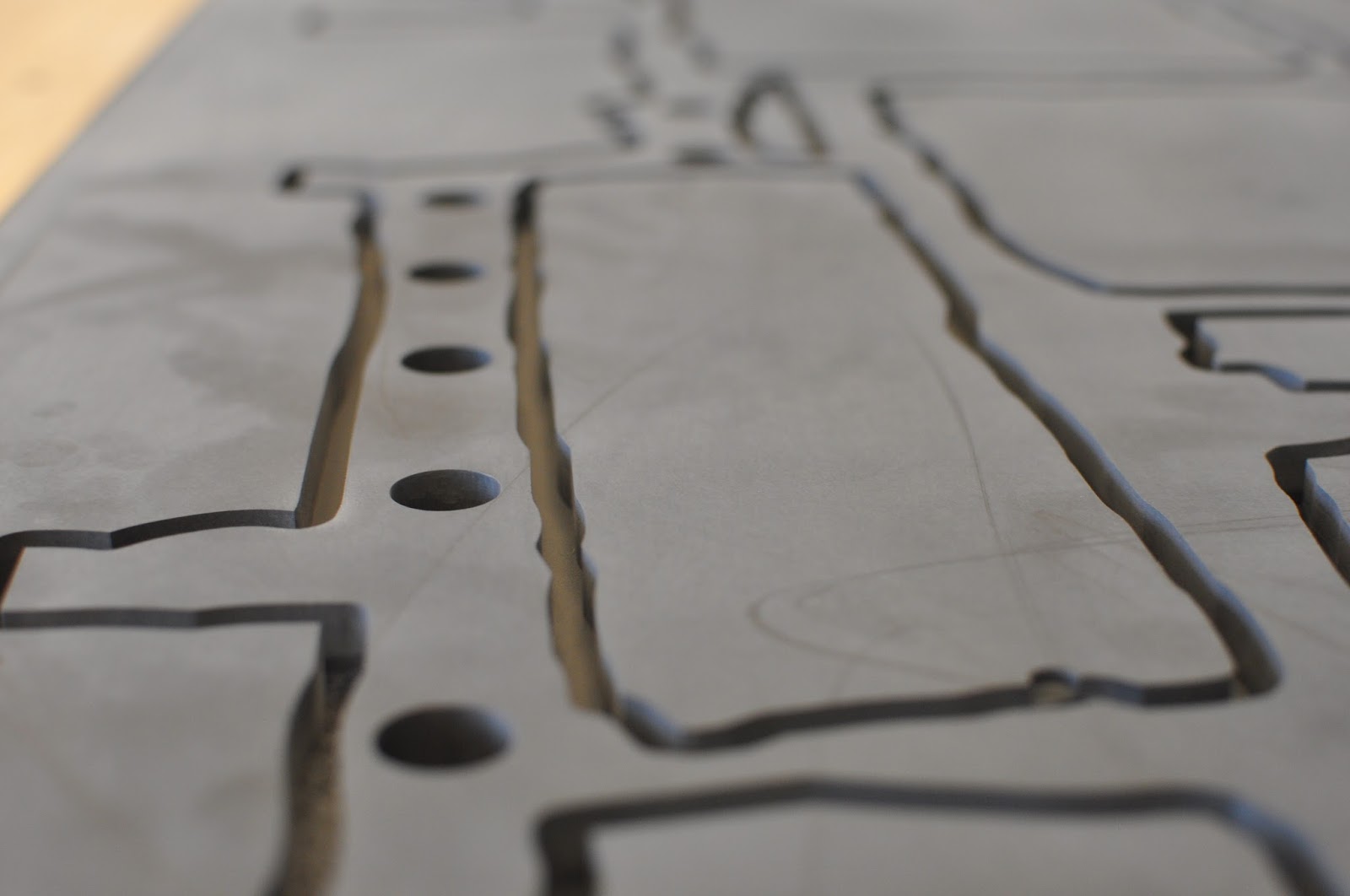 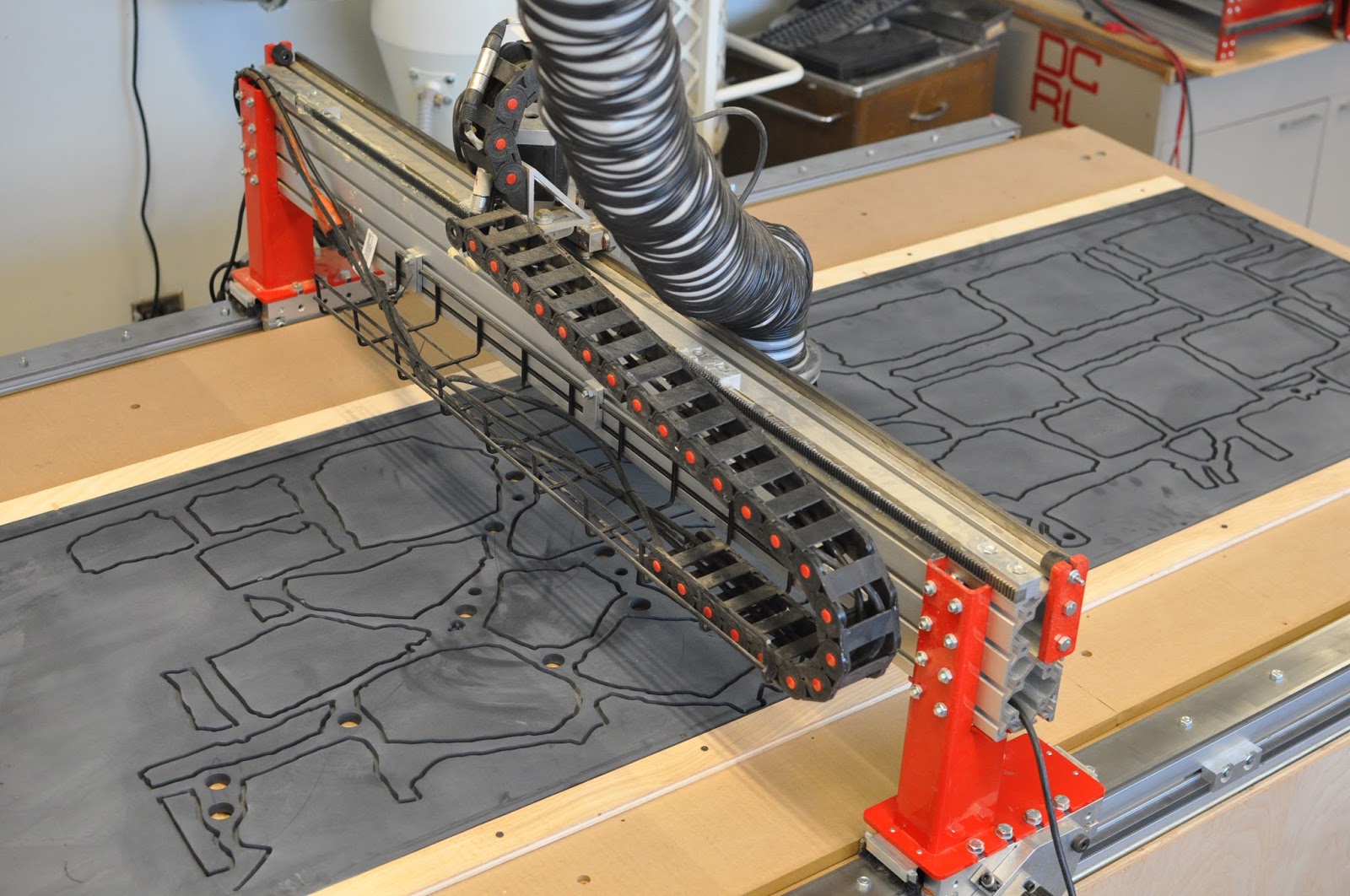 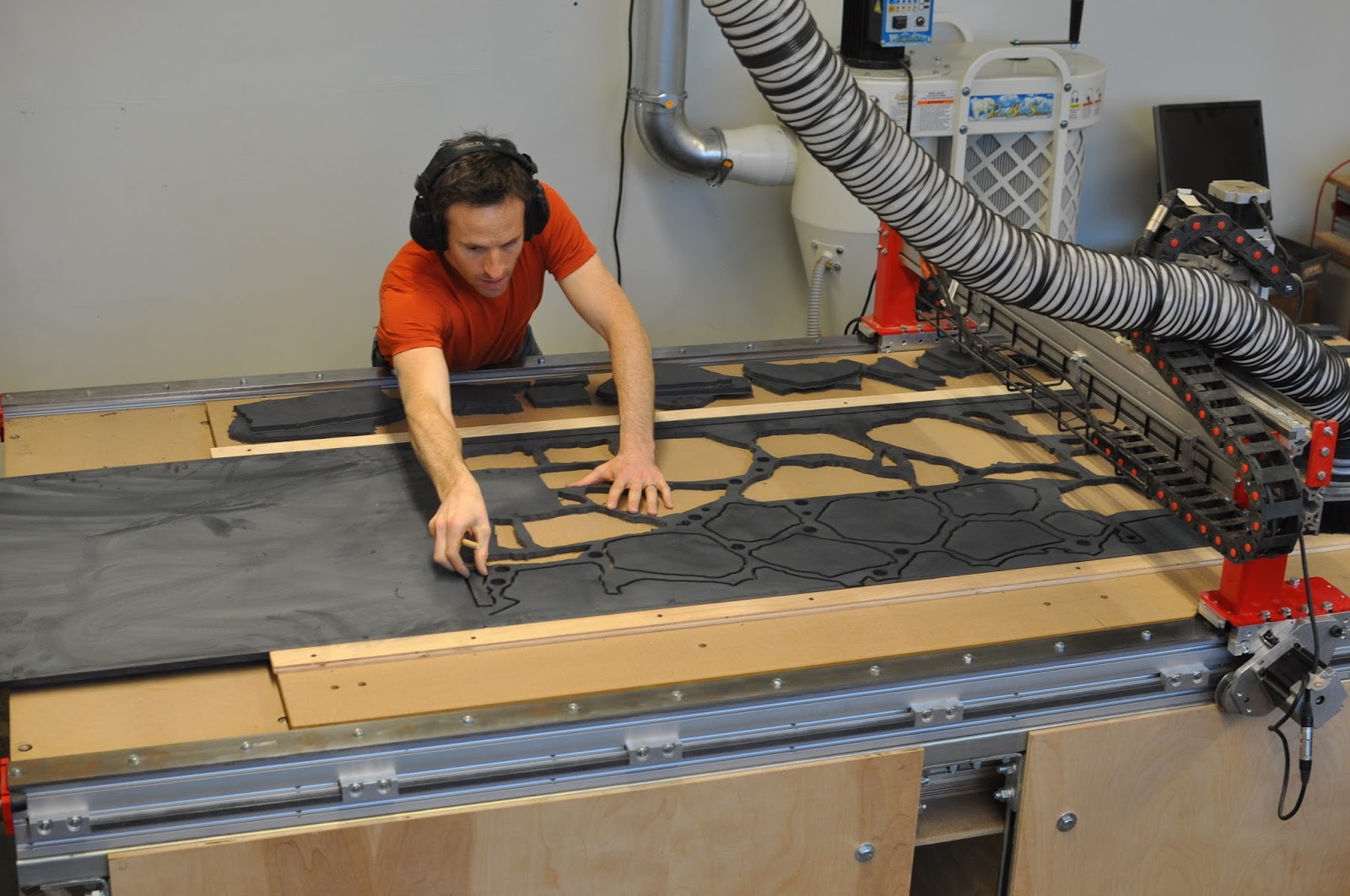 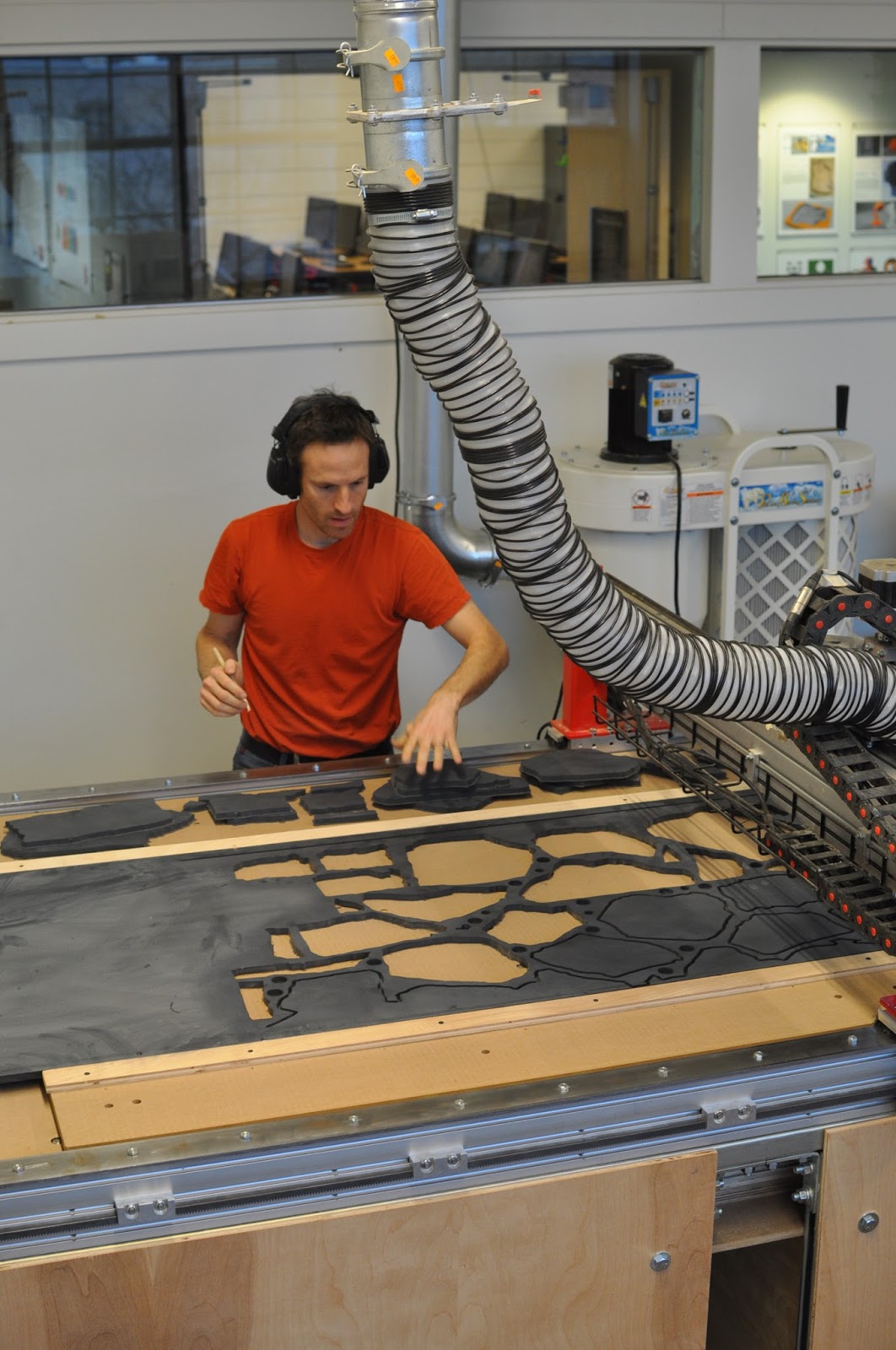 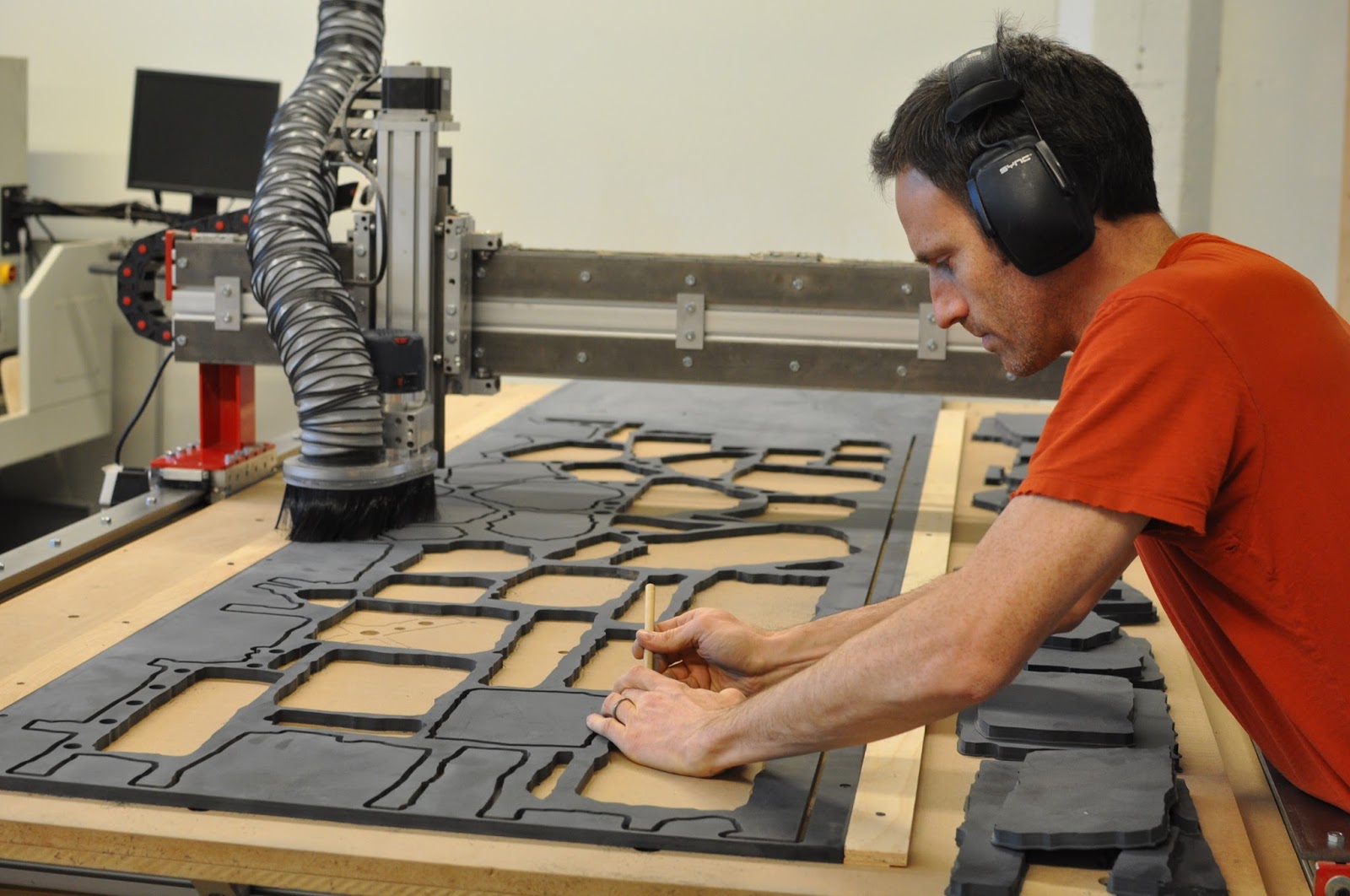 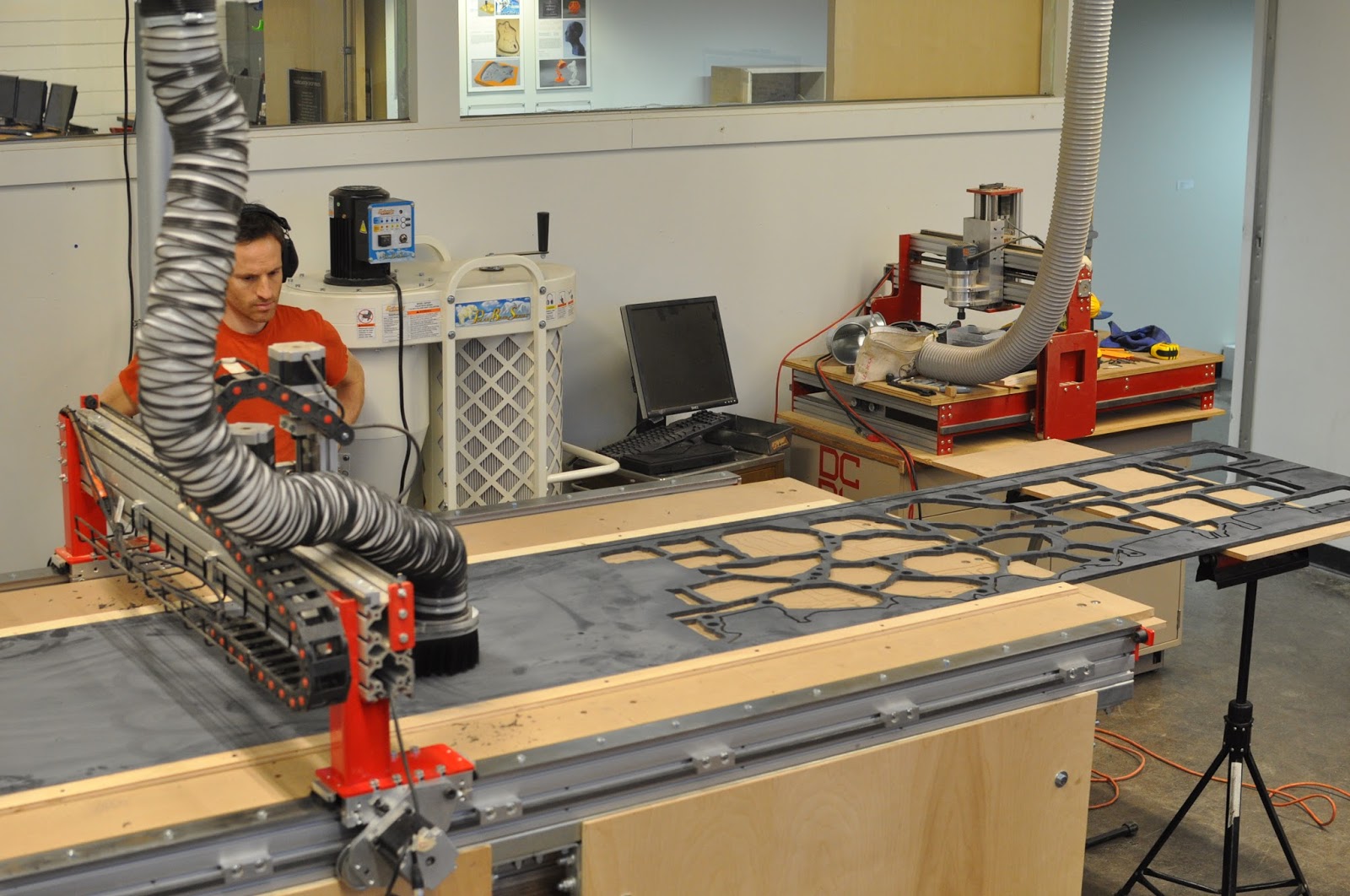 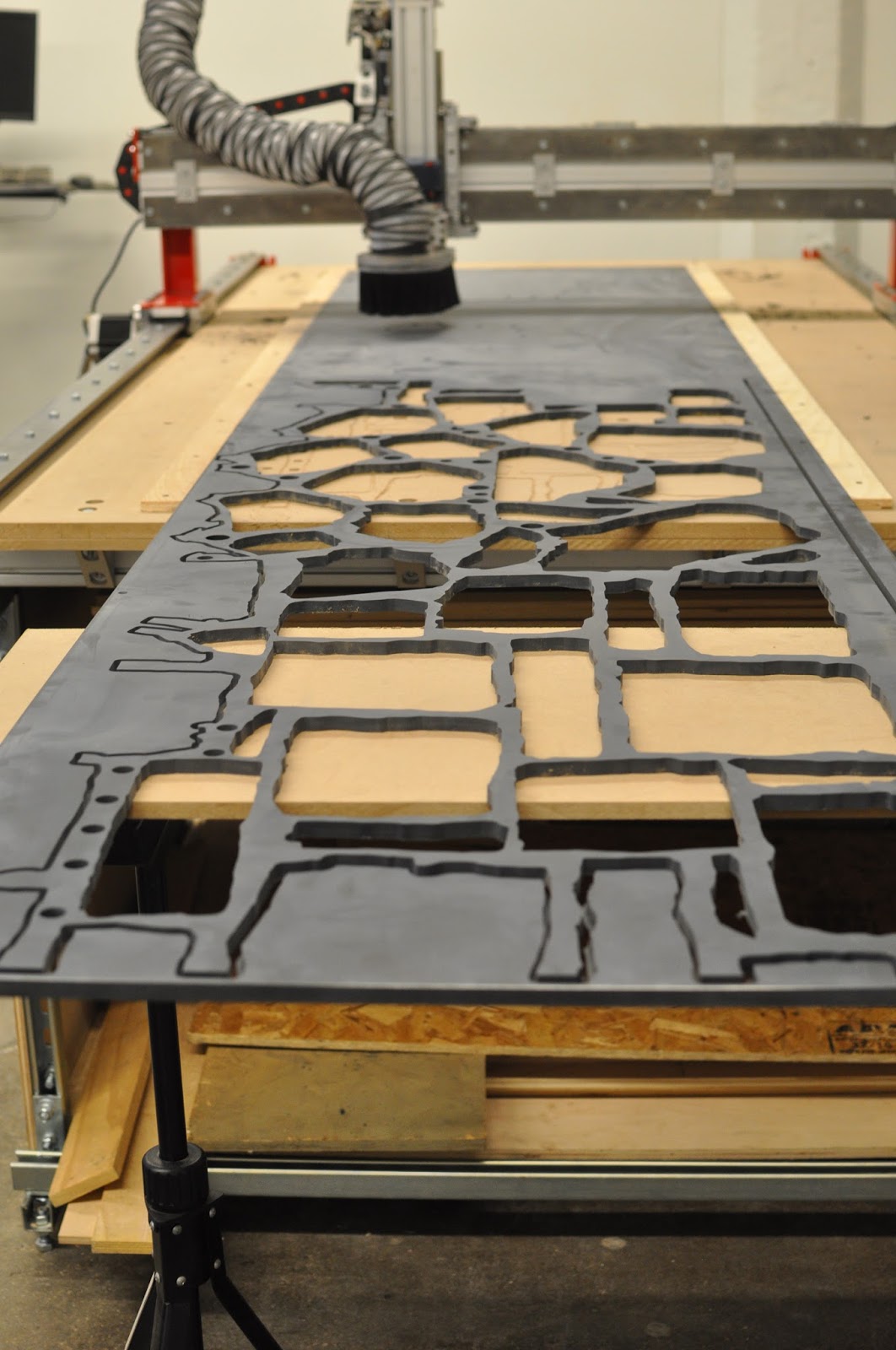 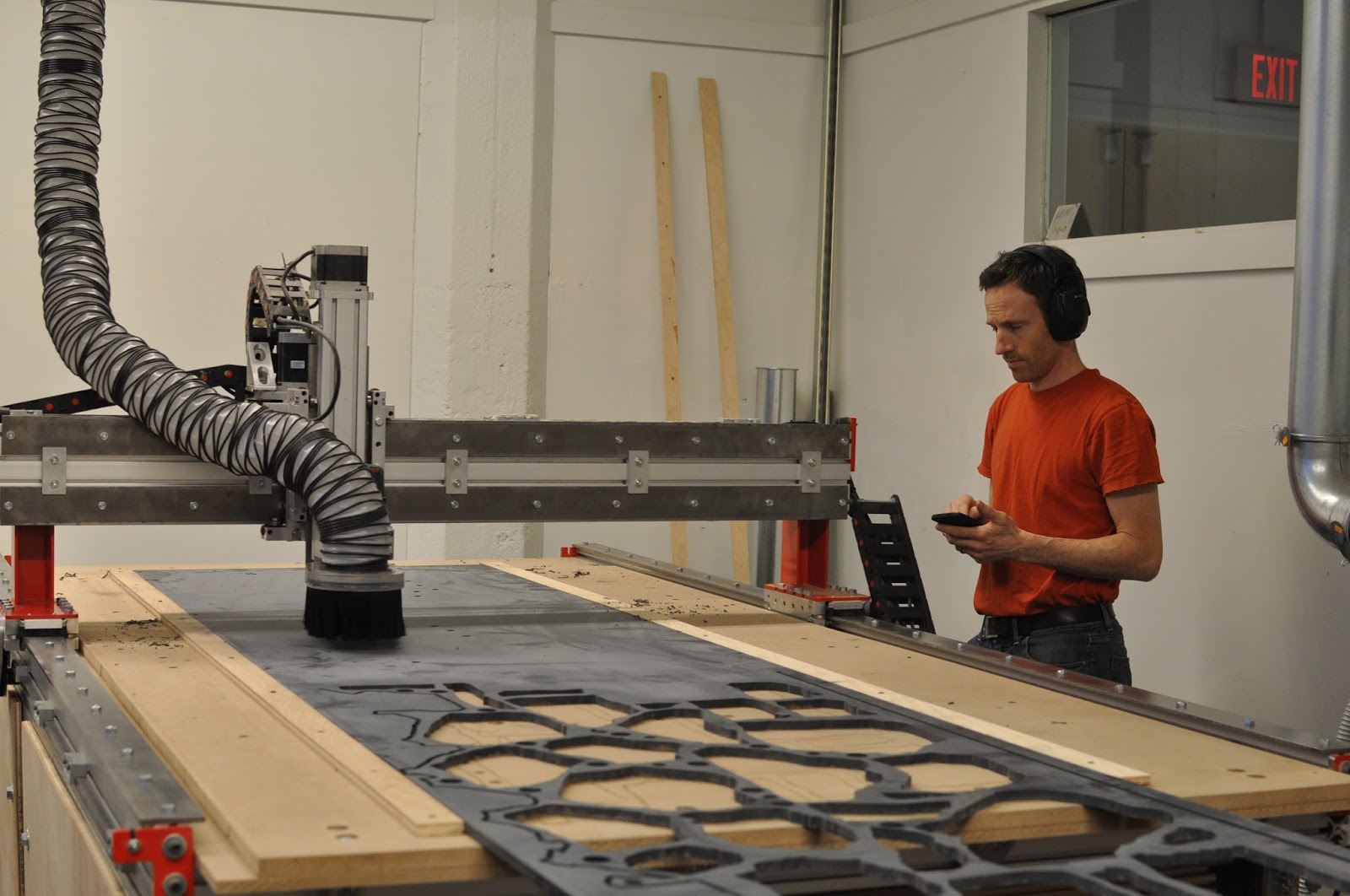 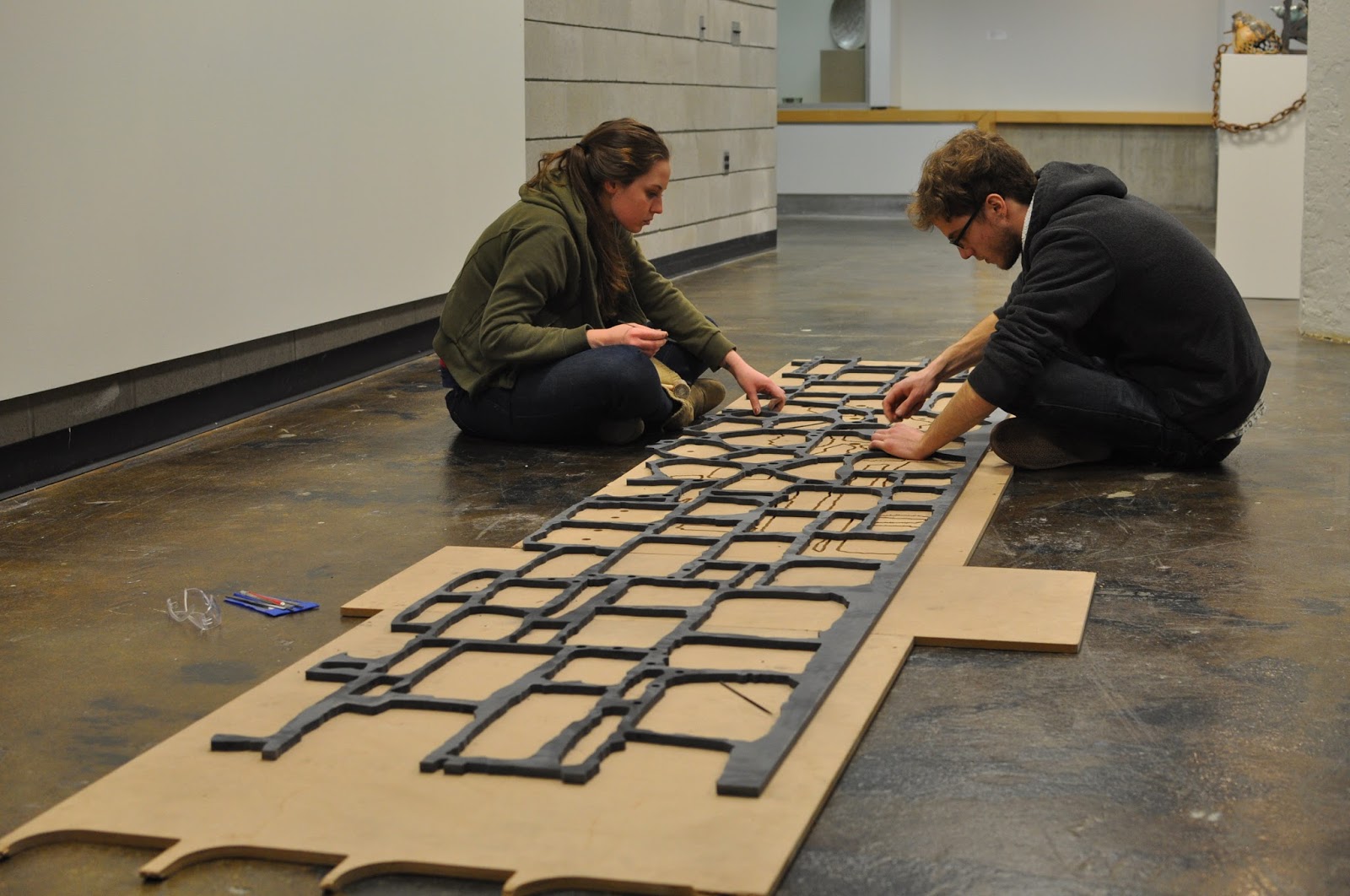 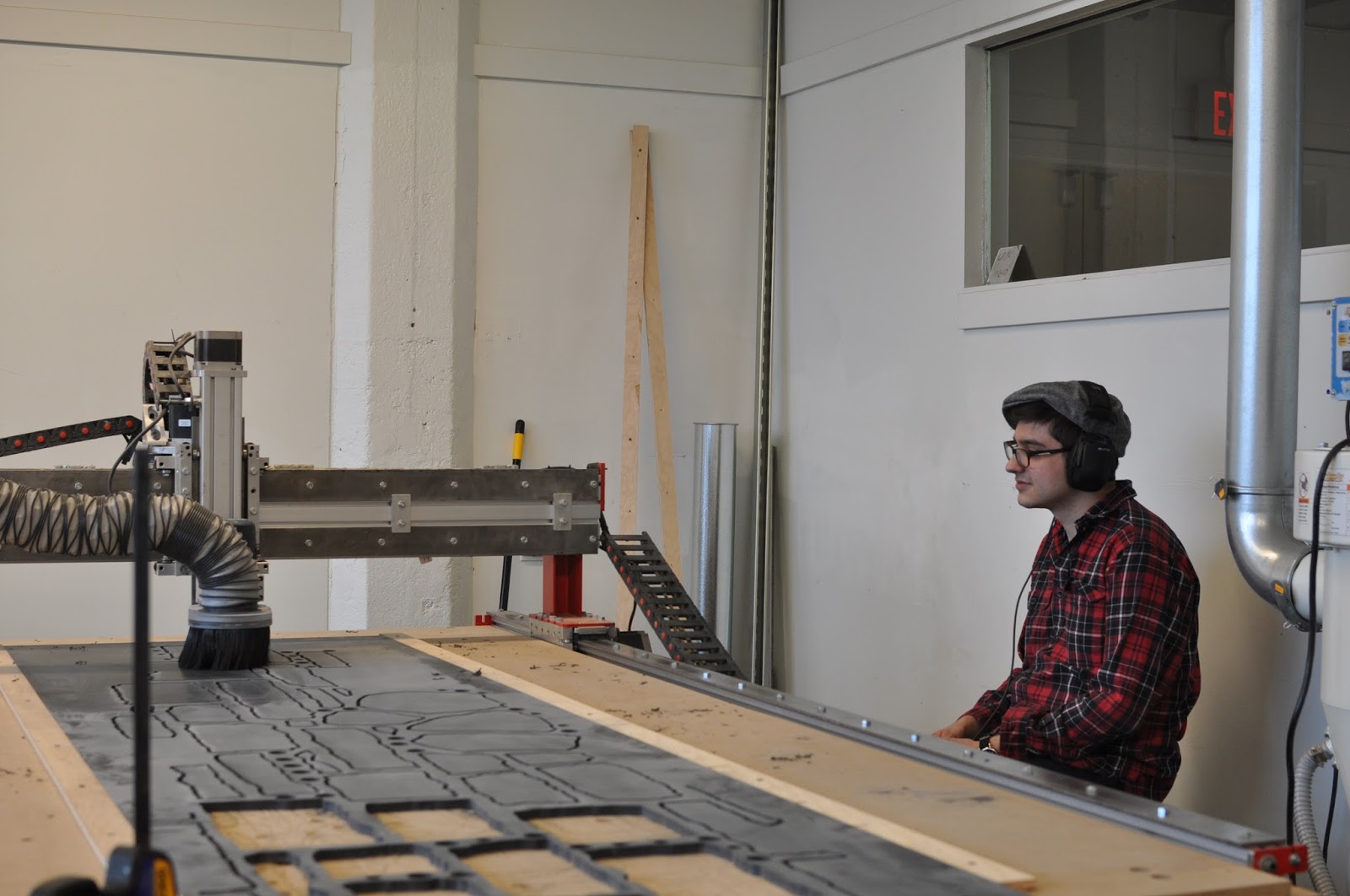 We came back the next day to continue cutting only to find out that the machine had gotten out of position somehow. We soon discovered the router was missing steps for some reason. I switched computers and within 10 minutes we were up and running. Only then, we found out that we were now out of calibration on the number of steps it takes to move a certain distance. We also found that the gantry was not square to the x rails on the machine. Feeling a bit deflated, we trudged ahead and Leo and I were able to get things squared and then calibrated. By this time we had wasted most of Tuesday, but we decided to make a test cut of his file in 1/2" mdf. We tested this and everything seemed correct. We stopped the mdf cut and loaded the second sheet of Corian and he ordered another sheet to replace the  first one I had messed up. We cut the first half of the sheet and decided to keep going on the second half so we could at least make sure that everything matched up after reindexing. We wanted to make sure everything was "right" for the other two sheets we would be cutting. The first sheet indexing turned out well and by the end of Tuesday we had the first sheet completed and ready for filing of the small tabs inside the openings we were cutting.

From this point on, we jut kept cutting Corian. The new sheet was shipped the same day as ordered and it arrived from Minneapolis the following day. The students and Leo sanded it while I babysat the CNC router. We had four bit changes on each half of sheet, so there was a lot of back and forth on setting things up and double checking to make sure everything was accurate. I was stressed all week after experiencing the Tuesday set-back and I was praying that the other sheets would go well. Corian is expensive, not to mention Leo's exhibition was at stake.

Here is how Leo described the piece when he proposed making it in the DCRL:
For this piece, I extracted the mortar joints from a photo of a masonry wall and cut those lines from a sheet of 1/2" thick Corian. Corian is a mixture of acrylic and alumina trihydrate and cuts nicely with CNC routers, though can wear through tooling faster than wood. The original masonry wall also had marbles embedded in the mortar that were squished in at differing depths. The backside of this piece has spherical pockets cut at the appropriate depths to set the marbles correctly.

I'll tell you more about the inspiration for this piece later...

Posted by Frankie Flood at 4:07 PM