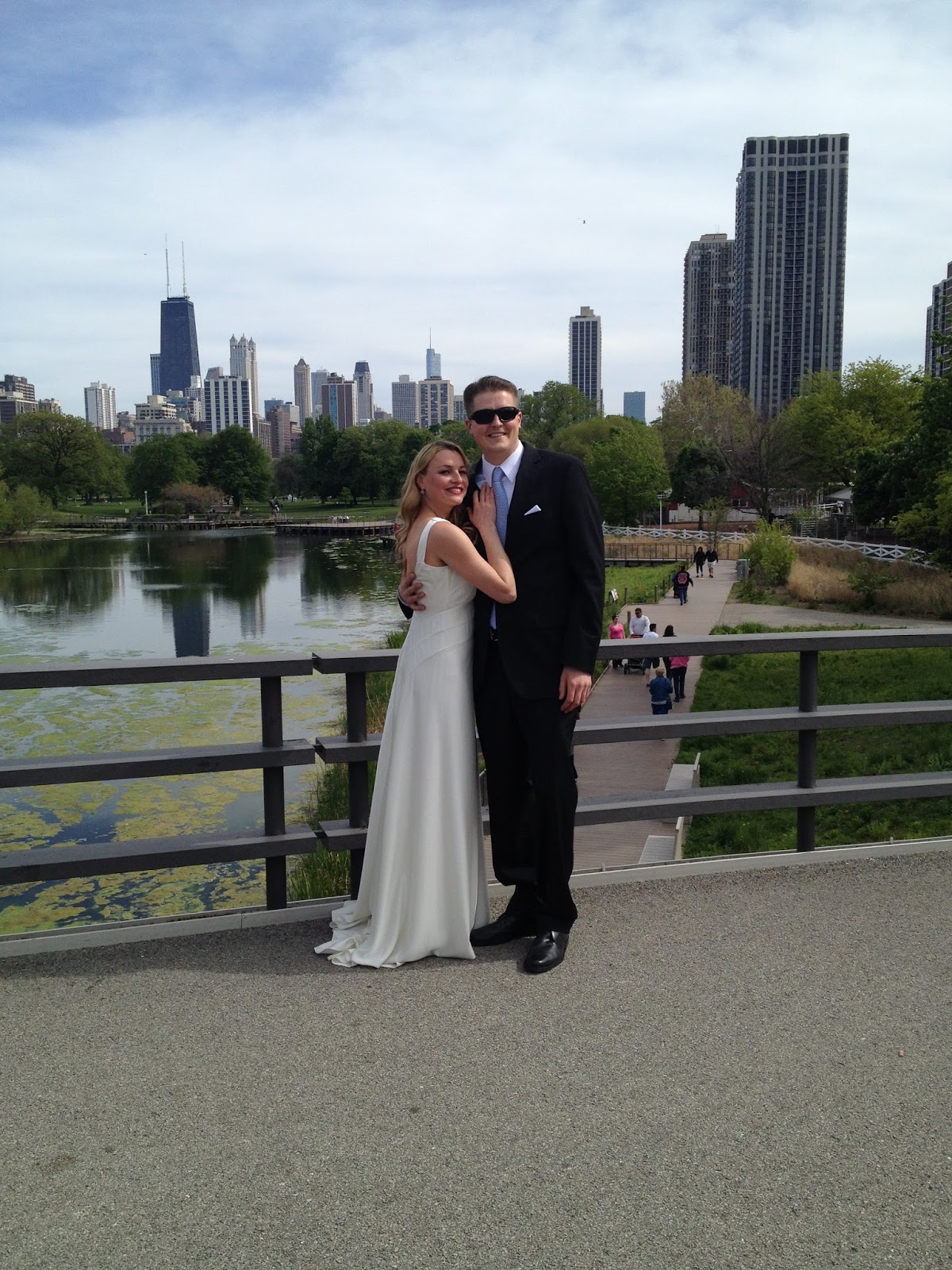 Eric and Inna were married this past weekend. The ceremony was great and Eric did a terrific job, as usual. Jill and I dropped the kids off at Carrie's place before heading into the city for the wedding. We had a great time even though we felt lost without the kids. It was so good to see familiar faces and to have the opportunity to reconnect with friends. Jill and I had a great time visiting with Tom and Teresa at our table (Eric, you did a great job of placing with us with this lovely couple - nice thinking). We also saw old friends from school, like Ricky (and we were able to meet his fiancé), Chung, and Toshi; and were able visit with Eric's parents. I enjoy visiting with Eric's parents as I miss going out to the farm to work on "rusty metal". The only person that would be able to complete with Eric's mom in terms of thoughtfulness and sincerity would have been my own Grandma Ruby, so I always look forward to seeing Sandy. I realize how much Eric and I have in common when I talk to his parents.

When I first met Eric he was a loud, center-of-attention, undergraduate student that was taking Metals courses when I was a graduate student at the U of I. Carrie Grapenthien was an advanced undergraduate student that Jill and I had already grown quite fond of. Carrie mentioned that I would love to work with Eric in the future and that he would most likely be taking a course that I would teach (as I ended up teaching as a maternity replacement for Billie) and that he was a great student. She thought that our farming community upbringing would mean that we would bond instantly. I had already witnessed Eric's "outgoing" personality and I believe that I commented to Carrie "that there was NO WAY that I would ever be friends with Eric Larson". We were just too different. As fate would have it Eric ended up finding his way to my personal studio along with his Industrial Design colleague, Ricky Biddle. The two were looking for a way to create a magnetic levitating sphere for an industrial design project and I had just completed construction of a sphere turning attachment for a South Bend lathe that I had restored.

I fell in love with the tenacity of these two young men and their sponge like qualities. They were both extremely talented Designers and their abilities complimented each other in a manner that I still cannot put into words. They became "a bridge" from the Industrial Design studio in the Art and Design Building to the Metals Studio at the Art Annex Building. Soon I began to see more and more ID students finding their way over to the Metals studio and Eric and Ricky were leading the way in understanding how process and material have a direct effect on design. Little did they know, but they were demonstrating Jonny Ive's ideas about what the design process should exemplify.

"[the design process] is about designing and prototyping and making. When you separate those, ... the final result suffers."

My friend, Ian, and I spent many hours helping Eric and Ricky and they returned the favor several times over. My tools were their tools and slowly our friendship grew through the creation of some amazing objects. Needless to say I saw them almost everyday for the next two years as they learned how to use a lathe, shape metal, weld, cut, grind, cast, sew and push the material and process boundaries in everything they created. Eric and Ricky went through some challenging stuff during those years and came out on the other side stronger than ever. I was so proud of the work that they did at U of I and at the time, but I assumed that our friendship would end once we left the institution.

As I was moving out of my studio that final summer, Eric stopped by with a VW magazine that had a chopped Beetle in it. He mentioned that he had an old Beetle and "wouldn't it be cool to make one in the future?". We all talked about getting a shop together and even looked at a place with Ricky, but nothing transpired. I got a job at Taylor Studios the year after and Eric finished his Metals degree (since he had double majored in ID and Metals). Jill and I would still see Eric as he would come over to our house at night from time to time and I believe I helped him a time or two with some welded Sculptures he made that last semester.

Anyway, he graduated and moved to Chicago where he got a job working as a designer at a small firm. At the same time I made the move to Milwaukee for my first real teaching job. My first year here Eric and I started working on building two cars outside of Rockford and I would drive down on Friday nights so we could work together. Again our friendship grew through cutting, welding, and fixing rusty junk. I got to know Eric's family firsthand and we stayed connected to Ricky and Ian through the occasional email. Ian had taken a design job at Hallmark and Ricky at Steelcase. Slowly I was introduced to more of Eric's friends like Toshi and reconnected with Chung (who was in the first Metals course I taught as a grad student; he was a stellar student). I'm sure that there have been many talented people to graduate from the U of I over the years, but I can honestly say that I have not witnessed the shear amount of talent that I saw from the people I mentioned above. I could not be more proud of the people I became friends with at the U of I. These people have gone on to do so many great things with their lives. I am especially proud of Eric and Ricky for their accomplishments and their growth over the years.

It was such a honor to be at Eric's wedding to witness his love and dedication to Inna. I wish him many happy years as he starts this new chapter in his life. I know that he will tackle it with the same level of tenacity and dedication that he always brings to any project. Best wishes from one small town boy to another...

p.s. I guess Carrie was right!

Anyhow, just wanted to say thanks for your kind words. SO GLAD you and Jill were able to make it out. Your post was one of just a few things that really stand out for me from all the wonderful and memorable times from the weekend.

Very grateful you tolerated me making a big mess in your and Ian's studios so many years ago, it kicked off many of the things I now hold the most dear.