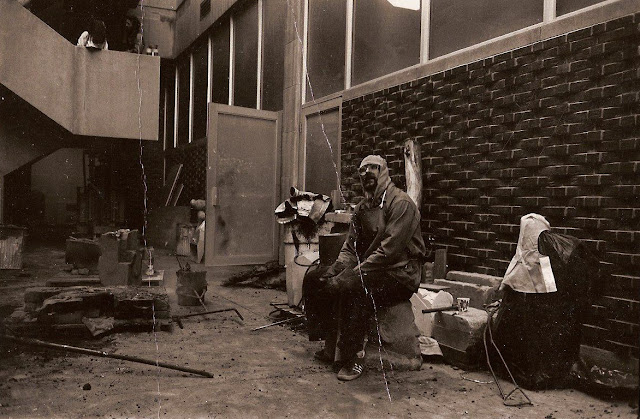 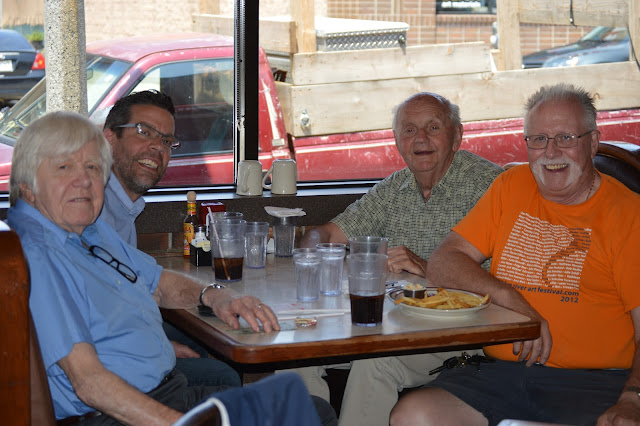 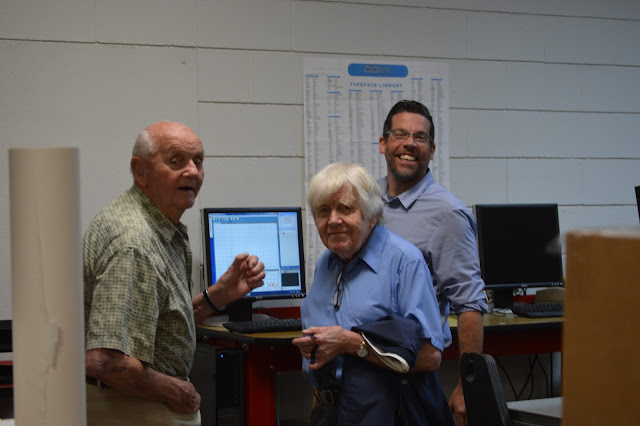 Chuck Kraus dropped by ta few days ago to pick up some images of his work that I had taken for him several years ago. We got together with Bruno and George for lunch at Ma Fischer's and then they came up to the DCRL to see the student work and the exhibition that was in INOVA. Chuck took a bunch of images in my studio and in the DCRL as I showed them various things around the place (I'll put these in another post).

The image at the very top, was in a collection of things that Chuck gave me when he retired. It was taken in the atrium area of the art building before it was enclosed and used as a teaching space in the Sculpture studio. Chuck taught foundry here and they would do iron pours here. Chuck trained many of the individuals who now teach foundry at other major institutions and the list of alumni who worked with Chuck in Sculpture is long due to his 40 years of service to UWM. I met Chuck for the first time in the atrium area as I taught a 3D Foundations course inside the Sculpture studio where he taught. We frequently taught courses at the same time and we became good friends during my early years at UWM. Out of all of my colleagues during my time at UWM, I LEARNED THE MOST from Chuck. His knowledge of foundry processes is unparalleled. Chuck had a tumultuous relationship with many people in the Art Department. I know there were various forces and circumstances in the UWM Art Department prior to me being hired, and I have heard stories from many different points of view. I'm not usually one to air internal politics in public but I want Chuck to know what an impact he has made on me and my career as a teacher.

I am glad that I did not base my opinion of Chuck on the comments of others and that I chose to form my own opinions from direct observation. That said, I can only speak to my experiences and I will say that in my years of working with Chuck, he had the student's best interests in mind and he did a excellent job of teaching students skills that they could apply to their careers. During my early years of teaching, the Sculpture area went through a difficult transition with new faculty and technicians, changes in policy, and a lack of trust by both faculty and administrators. At the time I did not have tenure and found it difficult to navigate the space between groups within the department. Chuck eventually retired as I believe he felt the pressure and changing times. I was very disappointed when he retired and I truly missed the community that he had built with various retired auditors that took courses such as George and Bruno (Bruno frequently took time to talk to a two or three year old Noah when he would be in the studio with me). Contrary to administrative pressure and opinion, the seniors citizens that enrolled in courses were an added value to the classroom setting not to mention they advocated on behalf of the departments within the local communities and passed on valuable knowledge to students. Too bad the Department didn't realize that these are the future benefactors that can make an impact on student learning and scholarship. I wish I could have done more to stand up for Chuck and what he had to offer, and I still have regrets to this day about this. After having my ten years of experience here at UWM I realize now that many of the things that were said in private were discriminatory, and the actions were harmful to the greater good.

It is interesting that once Chuck retired, other people became the target(s) of this behavior and I began to realize that there's something else at work here. The names and job titles change but the behavior stays the same. As a few years passed, many of the people that were pushing for our older faculty to change the way they taught or conducted themselves, found themselves on the receiving end of the same behavior. The trend continues...

What is it about our society that devalues the collective wisdom of our aging population? In a society where we talk about discrimination, bullying, and collegiality, I have been appalled by the activities and comments of others that are driven by peoples desire to "get to the top" or prove themselves to be better than another. As I prepare to leave UWM I am reminded of my true friendship with Chuck, his devotion to his students, his willingness to share information, his down to earth demeanor, his support of my professional activities, his kindness to my children when they were in the Sculpture studio with me, and his honesty. I have such respect for Chuck, his abilities as an artist and teacher, his knowledge, and his fairness.

I have respect for anyone who lives their life by the Golden Rule and Chuck did that during the time that I worked with him. Chuck GAVE more than he took, and I think you can't ask for more from someone when they do this. He deserved more than he received after working at UWM for 40 years and in this time that I am preparing to leave, I felt obligated to make note of this. Chuck, thank you for all that you shared with me, for the impact you made upon me, and thank you for being a true friend and colleague.

Posted by Frankie Flood at 4:09 PM

Beautiful. You said it all. Couldn't agree more!!

Thanks Christof. It just needed to be said...