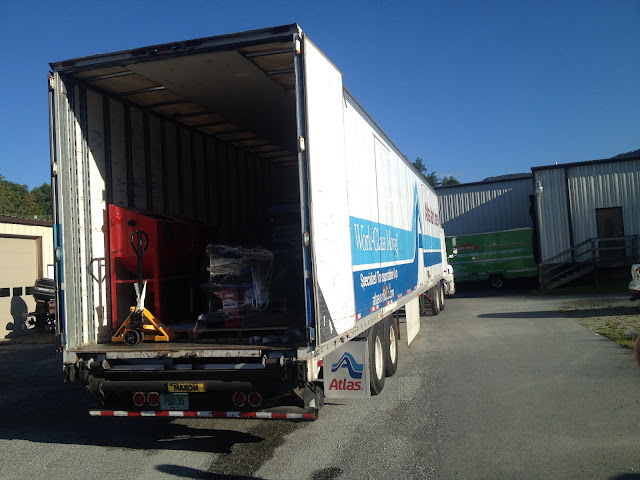 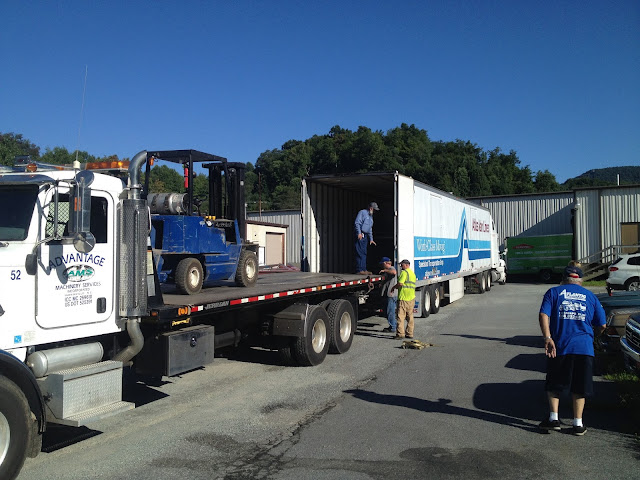 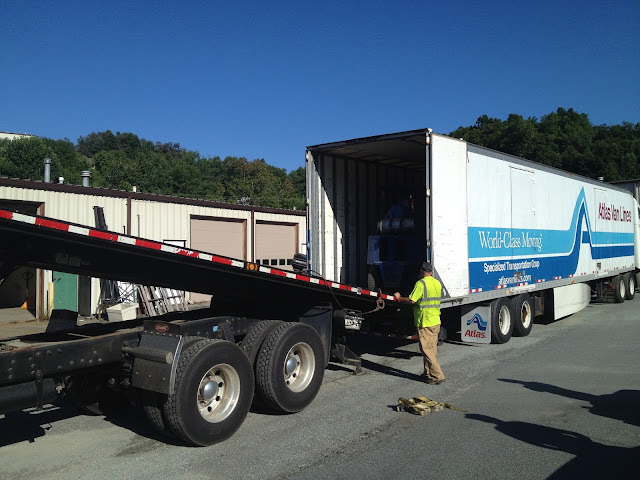 The rigging crew arrived with a flatbed trailer and a forklift on Saturday morning to meet the truck driver. We opened up the studio and they got to work. It was strange to stand and watch as my belongings were unloaded and slid into place inside the studio. The crew was insistent that I not help at all so Jill and I simply stood by the side and watched.

It appeared that everything had made the trip intact (there were a couple casualties, but nothing serious). The guys started by getting the first few skids off the truck but as they got to a few skids in, they realized that they would need to get the forklift inside the trailer to get some skids that were stacked on cross braces inside the trailer. Jeff was the forklift operator and he didn't bat an eye about tilting the tilt trailer down, backing the forklift up the flatbed, and then extending the flatbed out and onto the semi trailer ledge and driving into the truck. They did this dance several times over the course of the day.

Jill went and got drinks for the crew and later we both enjoyed talking to Jeff about the surrounding area and things to see in and around Boone, during the downtime with the forklift. The truck driver told us that we had 27,000 pounds of equipment on the trailer. And I still had a three skids which didn't make this trip. This was good, as the final piece of equipment was placed I just barely had enough room to close the garage door. The rigging crew were top notch individuals. The crew worked fast and efficiently and it only took them a few hours to get everything unloaded. They reminded me of the honest hard working people that I grew up around.

The kids were troopers once again as they waited patiently in the car and on the sidelines for us and the crew to be finished. We got into the car and Jill and I were both relieved that we had found people to help us unload, and that no one was hurt moving everything, and that things had arrived safely, and that we had a place to put everything, AND that this was the last piece of the puzzle to make the move complete. We both feel that there must have been some divine intervention to even make all of this possible in the first place. We drove away feeling as though this entire phase of our life was meant to be and that everything leading up to this moment was meant to prepare us for this time and place. I'm not sure how all of this worked out in such a short time frame, and how we physically made things happen, and how our kids didn't seize the opportunity to mutiny against us... but it was DONE!

Posted by Frankie Flood at 2:04 AM

Glad you got everything moved safely. Moving's always an ordeal but even more so when heavy equipment is required. Hope the new job is going well. Let us know how you're doing once you're settled in.

Yes, you're right. Jill was a little uneasy about me moving all of the equipment as she was afraid I was going to get hurt or strain myself. She insisted on the riggers and I'm glad she did. She's always looking out for me. I'll be sure to post progress soon. Things are really good here so far! Thanks for the kind words as usual!

Hope you are doing well!

That all sounds almost easier than my shop move from the house to the new shop across the yard! My advice - get a label printer/ labeller, you will find that the muscle memory of what drawer has what tools is likely useless as you arrange the new shop. I spend a lot of time asking myself where I put this or that in the new arrangement.
Nick

Will do, Nick! I've been needing to get a labeler for quite sometime. The stress of finding things has already started to wear me thin!

Sounds like an awesome way to get stuff done and take the stress away from yourself if you accidentally ruined anything! I bet the riggers insisted on you not helping due to liability issues. If they break anything, they are liable to pay for it; so if you help and break something, they could still be liable and have to pay you for what you may have done!