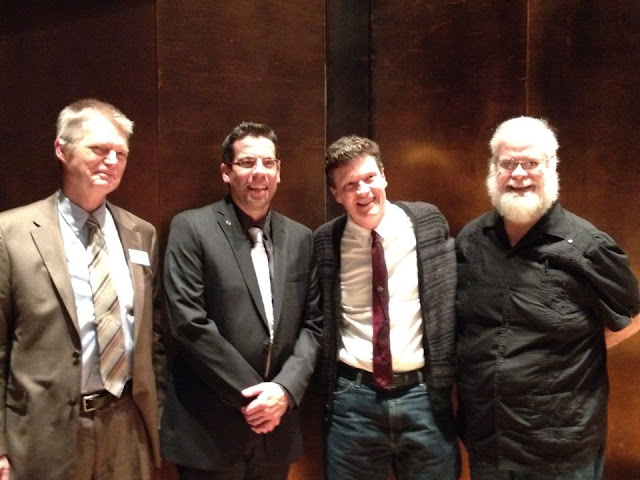 I received word from EIU last week that Glenn Hild's health was declining and that EIU was planning on doing something to honor Glenn for his dedication to his students and EIU. I honestly was taken back by the news. Glenn was my advisor (and chair of the Art Department) while I was an undergraduate student at EIU. I would meet with him each semester to discuss classes and plan my career at Eastern. Later when I was in the Master of Arts program at EIU, I took drawing credits with Glenn and we would meet each Friday to discuss the drawings I was doing along with my Metal work. I was taken back by the news and immediately contacted David Griffin (my former Metals professor at EIU) to make sure he was aware of Glenn's declining health; he confirmed. It was such sad news to hear that Glenn was battling cancer. I received word on Monday when I got to my office that Glenn had passed away on the evening of April 8th. This has really rocked me.

I remember Glenn as a tough but fair professor. I know I always did my best to try and work to the standard that he set. I remember Glenn telling me about always attempting to create at least one drawing or painting a day as a way to always keep working; consider this as he was serving in the role of a very busy administrative position. Glenn was a super positive force in his own quiet and calm demeanor. I had such respect for the things he taught me and he was always a professional in the way he conducted himself. Glenn later took on other higher level administrative roles that I know have made a major impact on the quality of education in the Arts at EIU. I know that Glenn had a direct effect on my personal career first through his initial advising, and then as a graduate level professor and one of a select few that were excellent mentors to me. He played a pivotal role in keeping me on track in my studies at EIU and always encouraged me. I mentioned this fact to Glenn when I was honored with an alumni award at EIU in 2013. I wrote about this in a blog post and mentioned that in typical Glenn fashion he exemplified the humbleness that he always displayed.

Please allow me to recount the story...

In talking with Glenn I told him how much I appreciated his guidance and the effect that he had in motivating me to do my best. His response struck me. He told me that my accomplishments were my own and that he had very little, if anything to do with how my life unfolded. He followed up by saying that we're all "replaceable" in the positions that we have and we need not worry about our future legacy.

I beg to differ. Glenn Hild is NOT replaceable and he NEVER will be. Glenn will be deeply missed by the EIU and Charleston, IL community for certain and his impact on the campus will be felt for quite some time. Glenn's legacy will continue through his former students, colleagues, and family. I am eternally grateful for his service to education and the arts. Thank you, Glenn.

Posted by Frankie Flood at 8:03 PM